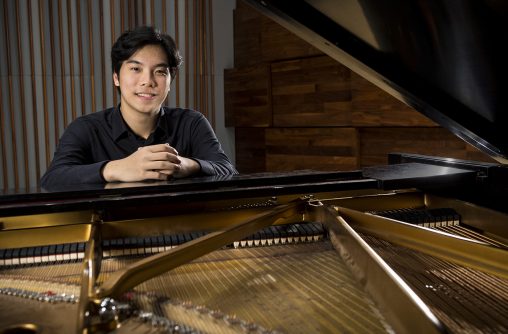 Lao received first prize in the New Albany Symphony Orchestra Concerto Competition, in which he went up against instrumentalists from seven different Ohio universities and conservatories within the state of Ohio.

He also won first place in the Collegiate Young Artist Solo Division of the Ohio Music Teachers Association–Graves Piano Competition, where he competed against piano students from four universities and conservatories.

The competitions took place in February and March, before Wright State transitioned to remote learning and Ohio stay-at-home orders were issued to help prevent the spread of the coronavirus pandemic. As a result of winning the New Albany competition, Lao was invited to play in a March 15 concert by the New Albany Symphony, but the concert has been postponed until late October because of the pandemic.

Lao is from Macau, an autonomous region on the south coast of China. He studies under Jackson Leung, professor of music, coordinator of keyboard studies and director of the Wright State University Chamber Orchestra.

“It is indeed very rewarding and gratifying to work with a student who is as talented, dedicated and humble as David Lao,” said Leung. “He has a genuine love for music, and his playing is brilliant, expressive and heartfelt, from the heart to the heart.”