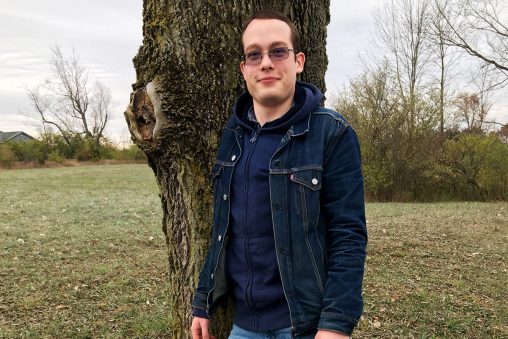 Carl Pickl, who graduated from Wright State in May 2019 with a bachelor’s degree in mechanical engineering, received a patent for a device he designed while working at the Air Force Research Laboratory.

A wind tunnel device designed by 2019 Wright State University graduate Carl Pickl that promises to improve the testing of turbine blades in jet engines has been awarded a patent.

In November 2015, while he was a student in the mechanical engineering program, Pickl was assigned to design a new wake generator for the low-speed, 10-foot-long wind tunnel at the Air Force Research Laboratory at Wright-Patterson Air Force Base. The tunnel is used to study the effectiveness of spraying a film of cold fluid on the turbine blades of jet engines to keep engine components from melting at high temperatures.

“Since there is a very hot mixture of burning fuel and air going past these turbine blades, the rotors and stators generate wakes,” said Pickl. “These wakes impact the turbine blade temperature so much that we cannot ignore them when we are testing methods to cool the turbine blades.”

The new device simulates the wakes — zones of low velocity surrounded by zones of higher velocity — generated by the turbine blades and made many changes in the previous designs. It combined the ability to operate the device for hours instead of seconds, changed the simulated turbine blade to different shapes and removed the undesirable reverse wake.

Pickl worked on the design for more than two years, completing it in January 2018. He said the hardest part was building and testing it.

“That is why I am not the only person on the patent because professors, machinists and interns at AFIT and AFRL turned this idea into something that was used in a film cooling experiment,” he said. “What I hope comes out of it is data worthy of the effort put into this design.”

Issued by the U.S. Patent and Trademark Office, a patent is a form of intellectual property that gives its owner the legal right to exclude others from making, using, selling and importing an invention for a limited period of years.

Engineering is in Pickl’s blood. His father is an aerospace engineer who works as a chief engineer at Wright-Patterson, and his mother earned a bachelor’s degree in aeronautical engineering. He grew up in New Carlisle, was home-schooled and enrolled at Wright State in 2015. He worked his way through college and had several scholarships.

Pickl became interested in mechanical engineering during his first job, at Global Automation Service, where he helped the company’s founder and CEO build and design automotive assembly stations by creating engineering drawings and machining parts.

“Combine that with four years of FIRST Lego League and three years of FIRST Robotics Challenge and I knew I would make a great mechanical engineer,” he said.

Pickl entered the Wright Scholar Program and worked at the Air Force Institute of Technology (AFIT) Combustion Optimization Analysis and Laser Laboratory. He was later offered an internship that enabled him to continue working there through college.

Pickl shared what he learned at AFIT and Global Automation Service to help fellow Wright State students in their coursework and capstone projects.

“Wright State prepared me to be successful by enabling me to graduate debt free and with a job,” he said. “Without being affordable, close to work, and offering me an awesome senior design project, I probably would not be at my current job.”

“Carl was definitely the leader of that team and was instrumental in the success that they had,” said Mitch Wolff, professor of mechanical and materials engineering and co-adviser of the project.

Pickl graduated from Wright State in May 2019 with a bachelor’s degree in mechanical engineering. He now works as an engineer at AFRL, responsible for data collected in the High Pressure Combustion Research Facility.

“In this facility we have two wind tunnels that we use to test experimental combustors,” he said. “We operate at real engine temperatures and pressures so things are always exciting, especially when I must program more than 360 different sensors to collect and communicate data during experiments.”

When he’s not working, Pickl enjoys studying the history of guns and competitive marksmanship.

“I love reading about firearm history from medieval times until the modern day, especially when I can physically inspect a rifle made in 1918 and see the machining marks made by mills and lathes and compare it to a rifle made in 1935 in a different country,” he said.