For the second time in less than two months, a mass food distribution was held in the parking lot of the Wright State University Nutter Center, attracting 667 needy households.

It was half the number of households that appeared for a Foodbank distribution at the Nutter Center in April, but 521 of the 667 households were first-timers.

“What was very unique was the 521 new households,” said Lee Lauren Truesdale, chief development officer for The Foodbank. “These are people who have never been to a pantry before. That’s a really high number. It tells us there are still people for the first time who are struggling to make ends meet.”

The Foodbank distribution was scheduled to begin at noon but started at 10:15 a.m. because vehicles had already begun lining up. Wright State and Fairborn police helped direct traffic into four pickup lanes and there was no large backup.

Foodbank volunteers distributed meats, fruit, potatoes, cabbage, onions and other items, enough to feed 2,110 people. In all, 50 volunteers, some with Wright State connections, assisted in the event.

“Having these folks here is really helpful to us,” said Truesdale.

She said that as businesses have begun to reopen in the wake of the COVID-19 pandemic, the lives of many people have stabilized. 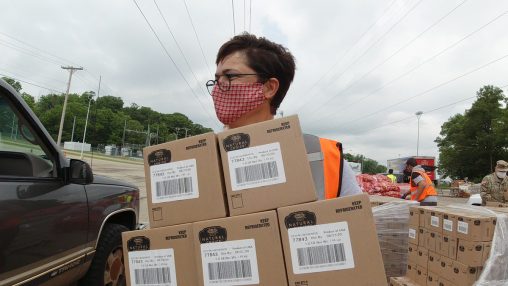 The Foodbank served 667 households during a mass distribution at the Wright State Nutter Center on June 10. (Video by Kris Sproles)

“Things are better, but not for everyone,” she said. “Every day there are folks who are struggling to make ends meet and they are experiencing those emergencies. We need to continue to help throughout the pandemic but also make sure that folks who need ongoing food assistance are able to get that from us today.”

Ashley Ward, of Beavercreek, a 2009 psychology graduate of Wright State, was a first-time Foodbank volunteer.

“I really just felt that I wanted to help out in whatever way that I could,” said Ward. “I feel like it’s a different way to help other than just donating money. It feels like I’m actually doing something and being part of something and meeting new people who are all trying to do the same thing.”

Volunteer Cheryl Davis, whose husband and son both attended Wright State, handed out onions. “People are in need,” she said. “We’re here to help.”

Joe Dick, manager of grounds and transportation at Wright State, was also at the distribution. He said it was an honor to collaborate with The Foodbank for such a worthy cause.

“It’s a great event for the community for anybody that needs food,” said Dick. “For us to be able to partner with The Foodbank that is making sure people are not going hungry.”

For the past six years, Wright State has partnered with The Foodbank to host a mass distribution at the Nutter Center.

Wright State employees regularly volunteer at The Foodbank, including during We Serve U Day, a university-sponsored program that encourages staff and faculty to volunteer in the community.

The Foodbank’s drive-thru will be open to distribute food on June 8 to June 11 from 10 a.m. to noon at 56 Armor Place in Dayton.

For more information, contact The Foodbank’s emergency line at 937-949-4096 or contact United Way 2-1-1 for support outside of distribution hours.

Wright State students in need of emergency assistance should contact the Raider Food Pantry at 937-260-0167.

The pantry will hold a $20 gift card giveaway to students in need of groceries on June 15. Students experiencing financial hardship can apply by filling out this online form.