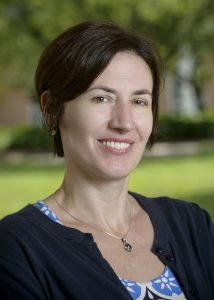 While the coronavirus (COVID-19) pandemic will likely reshape society for decades to come, its impact is nothing new. Disease and epidemics have always exerted a powerful influence on human history.

“It is also true that human responses to disease have always been embedded in historical, cultural and economic frameworks and as such have had varying degrees of effectiveness,” said Valerie Stoker, professor of religion and Brage Golding Distinguished Professor of Research at Wright State University.

Historical responses to epidemics in South Asia are case studies. South Asia, which includes India, Pakistan, Bangladesh, Nepal, and Sri Lanka, has been home to urbanized human habitation for several millennia and experienced many of the same epidemics as densely populated European and American sites. They include bubonic plague, smallpox, cholera, malaria, the flu pandemic of 1918, AIDS and COVID-19.

“As a large and culturally diverse region with a long and complex history, South Asia’s responses to epidemics have varied substantially over time and place,” said Stoker. “Some of the region’s more ancient medical practices continue to be successful in the fight against disease today, supplying the data for modern-day medical advances such as vaccines.”

The Bengalis exposed healthy children to smallpox scabs from recently infected humans or animals in an effort to develop protective immunity. It was partly this data that inspired the British physician Edward Jenner to use pus from infected cows to develop one of the earliest vaccines against smallpox, helping to eradicate one of the world’s deadliest diseases.

South Asia is also home to one of the world’s oldest recorded medical systems, Ayurveda or “the science of long life.” In India today, this system coexists with what’s often called modern Western medicine.

Similar to the ancient Greek medical theory of humors, Ayurvedic practitioners believe that good health results from a balance of basic bodily elements called doshas, said Stoker. “Ayurveda also places heavy emphasis on regular cleaning of the body in order to maintain good health,” she said. “Historian of Ayurveda Patricia Sauthoff notes this message aligns well with the hand-washing techniques we are currently being encouraged to observe.”

“Such moral judgment is often not explicit in modern Western medicine, but its implicit presence plays a role in the biased care that some populations receive and in the amount of research funding allocated to diseases that are deemed to be an individual’s ‘fault,’” said Stoker.

Other significant South Asian responses to epidemics include specific forms of goddess-worship, observed primarily in rural village settings, wherein a range of virulent fevers are attributed to possession by a goddess, she said.

Until its eradication in the 1970s, these fever goddesses were most typically associated with smallpox, which killed as many as one in three South Asian children during peak epidemic periods.

Under colonial rule, the average Indian was chronically malnourished, Stoker said, greatly exacerbating the progression of the various epidemics that would erupt periodically.

“As historian Sheetal Chhabria notes, chronic malnourishment was often the direct result of exploitative British land-management policies, which reallocated land away from subsistence farming to export crops and which reconfigured land-taxation in ways that left many farmers indebted,” said Stoker. “Debt often forced rural people off of their land and into overcrowded cities, where they still struggled to find food and where they were now more exposed to illness.”

Stoker said the global history of epidemics reveals that allowing a disease to overwhelm certain segments of the population while attempting to selectively protect others ends up compromising the health of all.

“The United States has demonstrated that its own track record on health care and wealth distribution make it vulnerable to COVID-19’s many ravages,” she said. “Perhaps one of the positive historical outcomes of the current situation will be a rethinking of national and international priorities.”