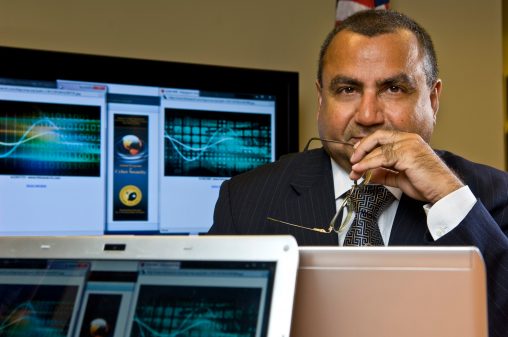 Vikram Sethi, a professor of information systems and supply chain management, authored “Cyber Weapons of Mass Psychological Destruction: And the People Who Use Them.”

A book that details the increasingly sinister trend in cybersecurity — from malware and hacking to cyber weapons — has been authored by Wright State University professor Vikram Sethi.

“Cyber Weapons of Mass Psychological Destruction: And the People Who Use Them,” published by Greylander Press, LLC, is available from Amazon.

Sethi, a professor of information systems and supply chain management, spent three years researching and writing the book, which details cases of cyber intrusions between 1996 and 2018. Sethi says cyber weapons are a class of their own — anonymous, difficult to trace and hidden behind a shield of networks and servers.

“This camouflage emboldens those who seek to do us harm,” he said. “In this book, I trace this evolution to its current form, wherein sophisticated operatives use cyber tools to sow chaos, mistrust and confusion in society in order to slowly destabilize and divide us.”

Sethi said the most difficult part of writing the book was to look beyond individual cyber incidents and seek out patterns and trends in the growth of technologies and their purposes.

“Typically, when a cyber incident occurs, we all focus on what was taken/ stolen/compromised and what actions we should take to secure or guard the future,” he said. “Tracing the trajectories across incidents and building fuller, more complete and explainable models to possibly anchor our thinking was a challenge.”

Sethi said the most gratifying part of writing the book was being able to explain the highly technical areas of cybersecurity in a simple manner understandable to a broad range of readers.

“My guiding question was that of how can I focus a reader’s attention on what this means to/for them?” he said. “Hopefully, I have been able to do this.”

Sethi hopes his book helps people see that cyber weapons are being deployed against the population every day. On June 9, Honda Motor Co. reportedly suspended some of its auto and motorcycle production globally following a suspected cyber attack.

“These weapons are sophisticated and appear in many forms — malware, spam, hackware, viruses, data breaches, social media campaigns, false narratives, a false sense of esteem by likes, retweets, etc., and by bringing out the worst in people,” he said.

However, Sethi said people can curb the damage from cyber weapons.

“Sensible ways of controlling this damage stems from using security techniques, possessing and refining a questioning attitude, and adopting a steely discipline to recognize falsehoods,” he said. “What is ‘really real?’ is difficult to answer, but beginning with this simple question is a strong enough start for most people.”