When a group of Wright State University students arrived at a Habitat for Humanity house under construction in Clayton to drop off a $500 donation, they weren’t sure they were going to meet the homeowner.

Monica Thomas and her two children, whose Trotwood apartment was heavily damaged in the Memorial Day tornadoes in 2019, will be the owner of the new Habitat home. And she was there to thank the students, members of Compassion in Action, a Wright State student organization.

“You can never really see what that moment’s going to be like until it comes and you see her face light up,” said co-founder Caleb Black. “She’s really excited about getting this house and what it’s going to mean for her and her kids. So that was special.”

The three-bedroom, one-bathroom house is expected to be finished in about two months. Construction began in January but was interrupted in March when the COVID-19 pandemic cut off volunteers. Work recently resumed when volunteers began to return, working under new safety guidelines.

“Volunteers are such a huge part of our program,” said David Mauch, development director of Habitat for Humanity of Greater Dayton. “They are the engine that makes us go.”

Thomas works third shift at Miami Valley Hospital North and has volunteered for Habitat. She will be able to purchase her home for zero percent interest. 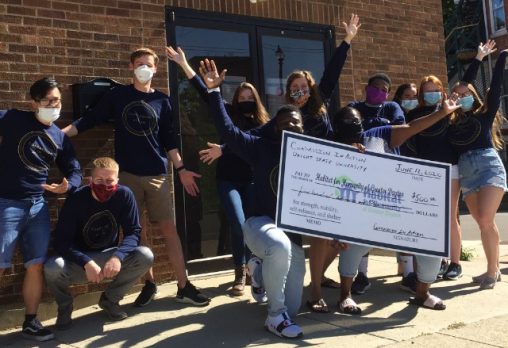 Compassion in Action, a student organization, made a donation to help build a Habitat for Humanity house. (Video by Kris Sproles)

“Monica is really a special person. She’s been through a lot lately,” said Mauch. “She’s just a real inspiration to us at Habitat.”

Chiemeka Okafor, a co-founder of Compassion in Action, said the group had been looking for a special charity to help and were impressed with Habitat and Thomas’ situation.

“That really touched our heart,” said Okafor, who majors in biological sciences.

Compassion in Action, which has about 100 members, raises money by soliciting donations and holding bake sales and sports tournaments. The group’s donation to Habitat went directly into building the house, which includes the cost of materials and paying the site manager.

“It’s not easy to raise money in these times,” said Mauch, a 1996 graduate of Wright State. “They gave of their time; they gave of their talent to do that. So as a Wright State alumni it’s just really special to see a community I feel an affinity to coming together to help in the community. It’s really awesome.”

Black himself volunteered to help work on the home several months ago, nailing down floorboards and putting up trusses for the garage.

“We’re happy for Monica and what this is going to do for her and her kids,” said Black, who majors in biomedical engineering. “It’s a great cause and we’re glad that we chose to help her.”