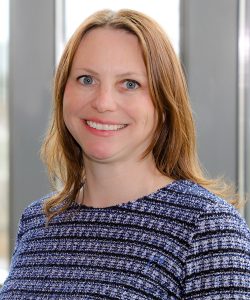 She’s gone from the war zone to the peace zone. Wright State University alumna Michelle Zaremba, who as an Army staff sergeant once led truck convoys through the battle-scarred streets of Baghdad, runs the Dayton Mediation Center.

“I saw the effects of war and the human suffering first-hand and realized there are better ways to address conflict,” said Zaremba, who earned a master’s degree in public administration from Wright State in 2007. “The Dayton Mediation Center supports people in addressing conflict in a productive and constructive way, and I wanted to make this service accessible to our entire community.”

The City of Dayton established the Dayton Mediation Center in 1987 in an effort to ease the impact of community conflicts on public resources. The center intervenes in more than 1,000 conflict situations annually. Its services are used by residents, neighborhood organizations, businesses, schools, law enforcement agencies and court systems.

Zaremba is the center’s division manager, overseeing operations. She ensures that the center receives referrals from the community, earns funding, and recruits and trains volunteers. The staff includes four full-time staffers, six contractors, two interns and 80 volunteers from around the community.

“We have been around for 32 years and feel like we are ‘the best-kept secret in Dayton,’” said Zaremba. “In my experience, conflict that is addressed in the earliest stage there is more likely to be a successful outcome than with a conflict that has festered for months or even years. My goal is to educate our entire community that we are a resource and can help people — either one-on-one or through mediation — address their conflicts productively and constructively.”

Zaremba grew up in Valley City, a small community 20 miles south of Cleveland. Before her senior year at Buckeye High School she joined the National Guard and after graduating in 1995 left for Army Basic Training.

Following her return, she enrolled at Kent State University and in 1999 earned a bachelor’s degree in applied conflict management. She then joined the Dayton Mediation Center as a case manager.

Four years into her career she was deployed to Iraq and served a 15-month tour as a truck driver, leading supply convoys through the streets of Baghdad.

“Before I left for Iraq, my mom asked me to write letters home explaining what everyday life was like in a war zone,” Zaremba said. “I would email my mom, she would forward the letters to her friends, and they would forward to their friends.”

Eventually, Zaremba’s hometown newspaper began printing the letters. When she returned home, the publisher asked if she would use her emails as the basis for a book. The result was “Wheels on Fire: My Year of Driving and Surviving in Iraq.” The book is described as one woman’s personal account of seeing the Iraq War up close, “experiencing the terror, the camaraderie and the frustration of being so far away from home for so long.”

Following her deployment, Zaremba returned to her job at the Dayton Mediation Center. She said her experience in a war zone made the center’s work seem even more important.

“The most gratifying part of my work is when people in conflict walk through our doors frustrated, confused, aggravated and hopeless and we are able to support them to shift into a calmer, clear empowered state,” said Zaremba. “People are able to address their conflicts in ways that work for them in productive and constructive ways and not have to rely on court systems or police.”

Steps to help prevent the spread of the coronavirus have forced the center to suspend face-to-face mediations and instead use the telephone or Zoom. But there is a silver lining.

“It has given more people the opportunity to participate in mediation because we are not geographically bound to one area,” Zaremba said. “I have had Zoom mediations with people in Florida, California and Iowa.”

Zaremba said she decided to pursue her master’s degree in public administration from the Wright State College of Liberal Arts because it was such a strong program and featured instructors who had worked for public agencies and brought real-life situations to the theories taught in class.

“An unexpected benefit was that I was taking courses with other community leaders,” she said. “I had the opportunity to network with classmates who are now mayors, city managers, and directors. The relationships I formed at Wright State have continued throughout the years.”

Zaremba said Wright State also prepared her to take on more of a leadership role at the mediation center and expand services.

“I believe I have been able to serve the mediation center and our community better because of the knowledge I gained at Wright State,” she said.