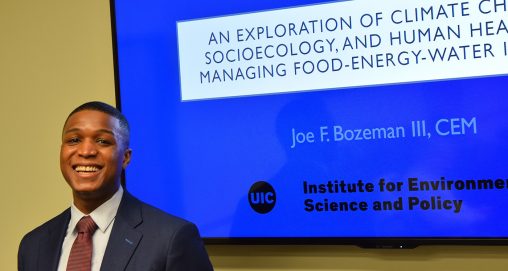 Joe Bozeman, who has bachelor’s and master’s degrees in engineering from Wright State, studies climate change adaptation as it relates to food, social identity and human health.

His studies on the environmental impact of food consumption along racial lines have thrown the spotlight on Wright State University engineering alumnus Joe Bozeman, who hopes his research will help shape government policy.

Bozeman, who graduated from Wright State in 2010 with a bachelor’s degree in mechanical engineering and a master’s in engineering with a focus on renewable and clean energy, conducted the studies while pursuing his Ph.D. in civil engineering at the University of Illinois at Chicago.

“I hope that my research sparks healthy conversation about the role engineers could play in ensuring we develop socially inclusive and equitable research,” he said. “I feel that energy and environmental sustainability cannot be sustained if large portions of our population are kept from the information and resources needed to adapt to climate change well.”

Bozeman’s studies on topics related to energy and environmental sustainability have resulted in multiple speaking engagements and been featured in major scientific magazines such as Popular Science, in newspapers such as the New York Post and on NPR.

One study, published in March 2019 in the Journal of Industrial Ecology, concluded that white Americans disproportionately affect the environment by eating foods that require more water and release more greenhouse gases compared with foods that black and Latino individuals eat.

It was possibly the first U.S.-level study that looked at food environmental impacts along racial lines explicitly.

“This study has policy applications too, in that it informs policy proposals to assist in the development of more effective food and climate change adaptation measures as well as provides a blueprint for other researchers to perform more socially inclusive studies,” Bozeman said.

Since 2010, Bozeman has worked for the U.S. Department of Veterans Affairs at the Captain James A. Lovell Federal Health Care Center in North Chicago, overseeing environmental compliance and energy conservation programming.

Bozeman spent most of his childhood in Dayton, graduating from Fairborn High School in 2003. He came to Wright State because of its Division I basketball program and its reputable engineering program. He played basketball his freshman year before deciding to focus exclusively on his engineering degree. 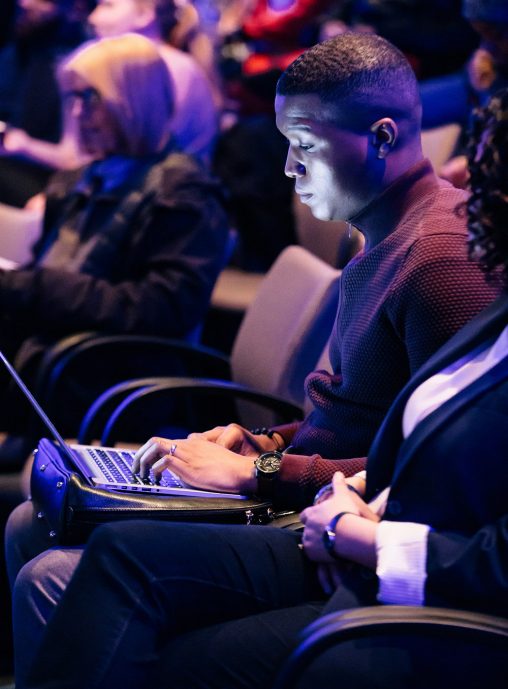 During a summer research project, Bozeman studied thermal conductivity of a synthesized material called shape-memory polymer, which can return from a deformed state to its original shape through temperature change and other stimuli. He performed experiments while using a high-altitude balloon.

Following the project, Bozeman “stumbled upon” information about fuel-cell technology and decided to incorporate the thermal experiments he conducted into his master’s thesis on the functionality of fuel cells, which convert the chemical energy from a fuel into electricity through a chemical reaction.

The project intensified Bozeman’s interest in green initiatives and drew him to Wright State’s innovative Master of Science in Renewable and Clean Energy program.

The program was the first of its kind in Ohio and one of about 10 nationwide at the time. It was started in response to a recognized need for solutions to America’s energy problems, especially its heavy reliance on fossil fuels.

The program enabled Bozeman to take a course in thermodynamics at the University of Dayton and a course in nuclear reactor engineering from the Air Force Institute of Technology. He also took courses at Wright State in solar engineering and advanced energy materials while researching solid oxide fuel cell technology.

“These experiences have been invaluable in my post-master’s professional and academic pursuits,” said Bozeman. “And after having traveled the world to meet many other peers in my field, not many can match the quality of the master’s degree experience I had.”

Bozeman has studied climate change adaptation as it relates to food, social identity and human health. His Ph.D. dissertation is titled “An Exploration of Climate Change, Human Behavior and Socioecological Factors in Managing Food-Energy-Water Impacts.”

“I believe that the social unrest we are all experiencing today around racism and policing in America is a snapshot of how unsettled society could become if food and energy access issues persist in the context of increasing extreme weather and migration events,” he said.