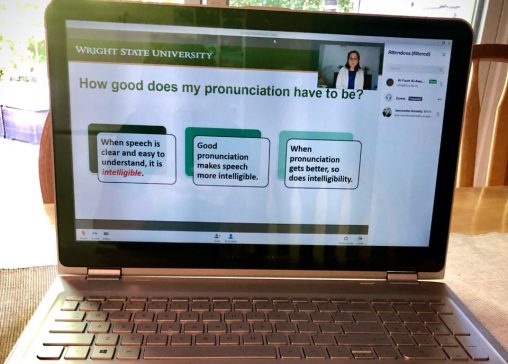 Wright State University faculty made online presentations on remote teaching and English pronunciation to a university in Iraq during webinars attended by several thousand people from around the world.

“We had people from 15 different countries tuning in and learning from Wright State in one webinar,” said Jeannette Horwitz, director of Learning English for Academic and Professional Purposes (LEAP) Intensive English Program at Wright State.

The idea for the webinars was born when former LEAP student Hashim Abada, who graduated from Wright State in 2017 with a master’s degree in aerospace systems engineering, invited Horwitz to give an online presentation to Al-Furat Al-Awsat Technical University in Iraq, where Abada teaches.

“I am trying to make a difference at my university by using the advanced methods of teaching that I learned while a student at Wright State and in LEAP,” said Abada. “Also, I am hoping to find mutual goals and do additional collaborations between our two universities.”

Abada was one of about 40 Iraqi graduate students who came to Wright State in 2014 and 2015 through outreach and recruiting that the College of Engineering and Computer Science had done in Iraq. The students took one year of classes in the LEAP Program and then started master’s and Ph.D. programs.

Horwitz was asked to give a presentation on how LEAP handled the switch to remote learning during the spring semester and share some advice on how to make distance learning engaging for students. On May 9, she gave the online presentation to 680 attendees, most from Iraq but also from many other countries.

On June 12, Pam Everly, an adjunct faculty member in LEAP, gave a second presentation on how to improve English pronunciation. The webinar attracted nearly 2,000 people via video or audio. 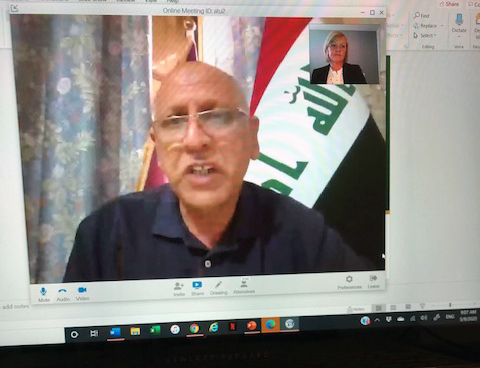 “We were excited to collaborate with a LEAP and Wright State alumni on these overseas online presentation/workshop initiatives as it brings attention to both LEAP and Wright State,” said Horwitz. “At a time when traditional outreach methods are limited, we’re enjoying new ways of doing things. We hope these ‘small steps’ can lead to additional future collaborations between the two universities.”

“Dialogue through online platforms is an opportunity for everyone to learn about the other’s thinking, share those ideas, share success stories and use them to serve societies and achieve prosperity,” said Al-Zuhairy.

Horwitz and Everly are scheduled to do a pronunciation webinar for the University of Babylon on Aug. 7. Several faculty members from that Iraq university came as visiting scholars to Wright State in 2017.