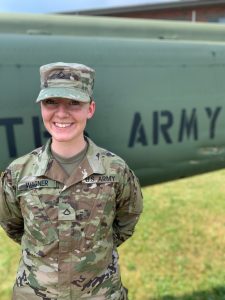 Taylor Wagner, who is posted with the 684th Medical Company in Columbus, oversees supply and logistics for all of the Guard’s missions in southwest and northeast Ohio.

“It’s not every day that you get to meet the governor of any state,” said Wagner. “That was definitely an experience for me.”

Wagner, a member of the Ohio National Guard, assisted with the testing of DeWine, First Lady Fran DeWine and Lt. Gov. Jon Husted on June 23 during Gov. DeWine’s regular news briefing to update the public on the status of the pandemic in Ohio. The news conference and the testing was carried live by WHIO-TV and ThinkTV in Dayton.

Wagner, who is posted with the 684th Medical Company in Columbus, oversees supply and logistics for all of the Guard’s missions in southwest and northeast Ohio. She was personally requested by an officer in the Guard to help with the testing of the governor.

On June 23, Wagner and a registered nurse colleague from the Guard arrived at the Statehouse and were introduced to the DeWines and Husted in a room down the hall from where the news briefing was held.

“He asked us how the whole process was going to go,” Wagner said of Gov. DeWine. “He asked where we were from in Ohio. He’s a super, wonderful person. He’s absolutely amazing.”

The actual swabbing of the DeWines and Husted was done by the registered nurse. Wearing a gown, gloves, N95 respirator mask and face shield, the nurse stuck a long cotton swab into each nostril and moved it around for about 10 seconds.

Wagner was in charge of preparing the paperwork and the vials that held the specimens. After the swabbings, she closed the vials holding the swabs, put them in a bag and put the bags in a cooler. Then the bags were transported to have the specimens analyzed in labs. All three of the swabs tested negative for COVID-19.

Wagner was born in Little Rock, Arkansas, and grew up in Beavercreek. Her parents were both in the Air Force and worked at Wright-Patterson Air Force Base.

After graduating from Beavercreek High School and the Greene County Career Center in 2019, Wagner went through Army basic training and then enrolled at Wright State to study nursing. She is also in the Army ROTC at Wright State.

Wright State’s College of Nursing and Health was ranked the No. 3 accredited nursing school in Ohio for 2019 by Nursingprocess.org. It was also named one of the nation’s top nursing programs by Nursing Schools Almanac. The college was ranked No. 16 in Ohio and No. 80 in the Great Lakes Region in 2019. In its rankings, the almanac considered student success such as first-time performance on the National Council Licensure Examination. Wright State’s current pass rate on the NCLEX licensure exam is above 97%, while the state average is about 87%.

After graduating, Wagner hopes to go into the United States Army Nurse Corps and be on active duty.

Wagner admits to being a bit star-struck and nervous in meeting DeWine but said he made her feel comfortable.

“He’s the governor of Ohio,” she said. “It was not a thing I would have been expecting a month ago. It was a wonderful opportunity. It was definitely an enjoyable moment.”