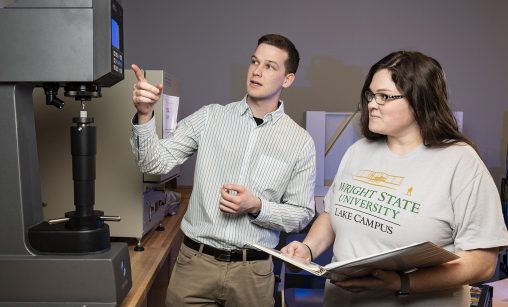 The value of an engineering degree from Wright State University’s Lake Campus is no secret. The word is out.

In its 10-year lifetime, the engineering program has exploded in popularity, expanding from seven students in 2010 to about 130 today. More than 100 students have graduated from the program since it was launched.

The Lake Campus engineering program has become a gold mine of talent for local employers such as Honda, Crown Equipment and Coldwater Machine, who love the strong work ethic of the students and the fact that many of them want to stay in the area after graduating.

“They know they will have these graduating engineering students for the long term,” said Mark Johnson, a lecturer in mechanical engineering at Lake Campus.

Jordon Coffman, who grew up in Rockford, was one of the seven students in the first engineering class at Lake Campus. He interned at Crown Equipment and was surprised at how much responsibility the company gave him.

“They threw me into engineering work,” he said. “The co-op experience was a huge factor in me learning what engineering is and what type of responsibilities I would have when I graduate.”

Crown offered Coffman a full-time job before he graduated. Currently, he works in the advanced energy unit of the company’s product development group.

Johnson said the co-ops and internships enable students to apply the theories they learn in class and incentivizes them to master the material because they realize they will have to know it in a real-world job.

Many of the freshmen and sophomores in internships and co-ops are usually tasked with working on engineering drawings to learn design. Juniors and seniors learn more project management.

Students must learn how to juggle classes with their internships and other responsibilities.

“The work ethic is just incredible up here,” said Johnson. “They need that work ethic in order to keep up and make sure they are able to do what’s needed.”

“As an engineer, I learned a lot more about CAD modeling, which is big,” she said. “I didn’t realize how much I would actually use that.”

“I learned a lot of people skills, especially having to talk to the shop floor employees,” she said. 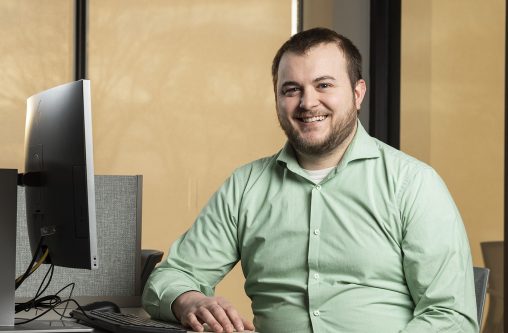 Jordon Coffman landed a job at Crown Equipment after interning for the company in the engineering program at Lake Campus.

Students who have graduated from the engineering program who work at Honda have told Johnson they really enjoy working there.

“What they’re doing matters,” he said. “They are taking products that consumers are going to be using and they feel that kind of pride about the company and themselves.”

Johnson earned his bachelor’s and master’s degrees in mechanical engineering from Wright State and is working on his Ph.D. After graduating with his master’s degree in 2016, Johnson came to Lake Campus.

Johnson said the small classes enable him to better know the students and give more personal attention to those who need it.

“And because of the small number of students we have, we are able to make our classes a little bit more hands-on with projects,” he said.

Senior design projects have included building a working quarter-scale tractor from scratch and a treadmill-like apparatus to measure the speed of fish.

“It was an interesting project because they had to deal with a propeller and the fluid dynamics to make sure they had the laminar flow so that it was nice and smooth for the fish to swim through,” said Johnson.

The engineering program is more than just classwork and internships. Students are also offered cultural opportunities. 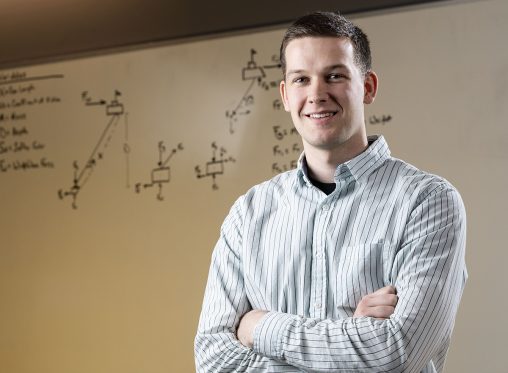 Mark Johnson earned his bachelor’s and master’s degrees in mechanical engineering from Wright State and is working on his Ph.D.

During the past two summers, Johnson has taken about a dozen of his engineering students on study-abroad trips to Jena, Germany, which features research institutes as well as an optical museum and the remains of a 15th century monastery. The students attended classes with German students at the Hochschule university of applied sciences.

“I know that at least two students last year had never been on a plane before,” said Johnson. “It allows them to open their eyes and see the bigger picture of the world.”

That community spirit doesn’t end with graduation. Coffman, for example, helps with a Crown STEM program in which high school students participate in engineering-related activities, making presentations on mechanical engineering.

“It tries to get students interested and help determine what engineering field they may be interested in,” he said.