It’s a delicious project. Wright State University French faculty members have created a series of instructional cooking videos teaching students, alumni and others how to make everything from sweet, mouth-watering chouquettes to buttery madeleines.

The cooking videos are all in French, were filmed by the instructors in their own kitchens and posted on YouTube.

“We entitled the series ‘Coucou Cuisine’ because ‘Coucou’ in French means ‘hi’ or ‘peek-a-boo,’ but of course it works in English, too, with a crazy or silly connotation that reflects the light and fun spirit we wanted to impart to the lessons,” said Kirsten Halling, professor of French.

Halling said the videos are designed to be easy to follow both linguistically and in the step-by-step presentation of the recipes.

“French cooking is often deliciously simple, and we thought that learning a few new French recipes would be a good way for French learners to spend their time productively while sheltering at home during the COVID-19 pandemic,” she said.

The faculty members shot the videos in their kitchens using tripods or having family members do the filming, and then they collaborated with each other using virtual communication. Halling edited the videos and uploaded them to her YouTube channel.

The primary target audience is current and former students wishing to practice their French and cooking skills, said Halling, who in 2019 received the Robert J. Kegerreis Distinguished Professor of Teaching Award. 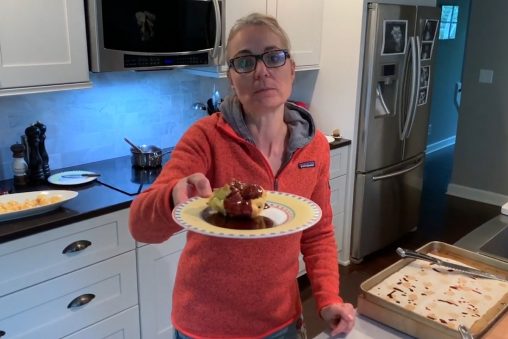 Pascale Abadie, associate professor of French, began the series with her video on making chouquettes.

“The response has been amazing so far,” she said. “Each of us has posted the videos to Facebook, and the comments show that alumni and former students enjoy being invited into our kitchens and reconnecting with us — especially given the current need for social distancing. Our secondary target audience is really just about anyone who wants to practice French or cooking or both at the same time.”

So far, the team has produced four videos, with each of the French faculty filming a video on how to make desserts or entrées.

The stars of the videos include the mixing bowls, baking trays, cutting boards and wooden spoons arrayed on the kitchen counters and islands. And then there is the food.

“They all require just a few good ingredients — butter is a common denominator — and we try to show how easy it is to produce good quality French food,” said Halling.

Halling says she loves all of the food in the videos.

“The chouquettes are sweet, but not too sweet – and can be dressed up with ice cream and chocolate sauce; the Croque Monsieur and Croque Madame are delicious French versions of grilled cheese sandwiches; madeleines are buttery cakes that melt in your mouth, and the torte au chocolat is a staple for chocoholics,” she said.

Halling said that since the videos focus on cooking, they are relatively simple to follow without a great deal of French experience.

“One of my friends from college tried one of the recipes without having ever studied French and said she was able to follow along just by watching the cook’s actions,” she said. “But it really does help to have a basic or elementary understanding of French to follow along.”

For those wishing to further their skills in French, each video also has an interactive EdPuzzle version that tests linguistic comprehension. Halling said that while the project began as a way to entertain and engage with students and alumni while in lockdown, other applications began to surface.

“We were especially pleased when a local high school teacher told us that she used the EdPuzzle versions of the videos to enhance remote teaching,” she said. “We hope that other teachers will make use of these materials when they need some authentic French online resources.”

It looks like there will be more videos on the way. A couple of Halling’s advanced summer students say they plan to produce cooking videos for their final project.

“And I think I can talk my colleagues into making another video or two before we head back to classes in the fall,” said Halling. “We’re having too much fun to call it quits right now.”