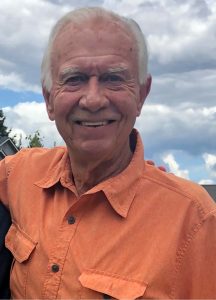 Jim Sayer, a longtime Wright State faculty member once described as a “true pioneer” of the university and who was dean of the Lake Campus before retiring in 2010, has died at the age of 73. Sayer passed away on July 12 in Wenatchee, Washington.

Sayer’s career spanned 40 years in higher education, 36 of those as a faculty member at Wright State.

He was a professor of communication who taught courses in rhetoric, mass media, political science, history and the First Amendment. He chaired the Department of Communication for 18 years, was president of the Wright State Faculty for eight terms over four decades and was dean of Lake Campus from 2007 until retiring in 2010. Following retirement, he taught an Honors seminar at Wright State during fall semesters and was a frequent presenter at the Alumni College.

Sayer also authored or co-authored 12 books and over 60 refereed articles in addition to other articles and conference and community presentations.

For many years, Sayer was the voice of Raider Express, Wright State’s dial-in registration system, and along with the late Bill Rickert served as graduation orator. From 1979 to 1987, he hosted “FOCUS,” a weekly news and public affairs television program on WPTD (ThinkTV channel 16), which received a Regional Emmy for excellence in informational programming in 1986.

During a 2017 interview for the Wright State University Retirees Association oral history project, interviewer Dan Abrahamowicz called Sayer “a true pioneer of this university and making it a great institution.”

“I just enjoyed being here,” Sayer said. “I enjoyed the faculty with whom I worked, not just in my department but other departments, and I enjoyed the students that I was dealing with. And by and large I enjoyed my interactions with the central administrations, whoever they happened to be at the given time. I just had fun, and I thought this area was perfect for my family.”

W. Stuart McDowell, chair of Wright State’s Department of Theatre, Dance and Motion Pictures for 22 years, said Sayer was one of his best friends at Wright State.

“Jim was for me a profile in courage, of how crucial it is to speak your mind, especially in public, where letting people know where you stand on the issues can both reaffirm and inspire others who need to hear another giving voice to the truth spoken loud and clear, for all to hear,” said McDowell.

Sayer was born in upstate New York and moved to Arizona when he was 15. He earned his bachelor’s degree in political science from Northern Arizona University, his master’s degree in speech from the University of Arizona. He taught speech and coached the debate team for three years at Northern Arizona, then earned his Ph.D. from Bowling Green State University in 1974 before joining the Wright State faculty that fall.

He was an elder at Kirkmont Evangelical Presbyterian Church in Beavercreek and after moving to Wenatchee in 2018 served on the finance team at Saddlerock Evangelical Presbyterian Church and on the board of Serve Wenatchee Valley. He was a lifelong Mickey Mantle-loving New York Yankees fan who played as many as seven softball games a week well into his 60s.

A celebration of Jim’s life will be held at Saddlerock Evangelical Presbyterian Church in Wenatchee, Washington, on his birthday, Sept. 11.