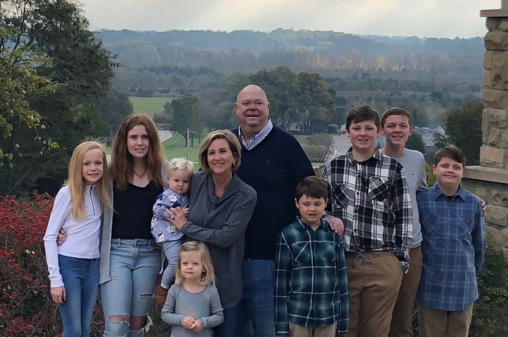 “Oh no! We didn’t sign up for all that! We paid for a standard room, not the top suite!”

She and her family were going on a Norwegian Cruise to the Caribbean to make some final memories with their teenage son, Aaron, not trying to drain their bank account.

In August of 2007, 15-year-old Aaron Whitmer started to show symptoms of what soon would be diagnosed as a malignant brain tumor. Just a week earlier the family had moved next door to the Beavercreek home of Bob Mills and his wife Marcy.

Bob was an up-by-the-bootstraps success story who had come to Dayton in 1978 from Erie, Pennsylvania with $200 in his pocket and would go on to become a Beavercreek-based construction and real estate magnate and a know-no-bounds philanthropist who orchestrated the most successful charity events in the history of the Miami Valley.

The cause that resonated the most with him was cancer. While he had survived stage 4 melanoma in 2003, he would later lose Marcy to metastatic cancer in 2009. And 10 weeks after her death, his seven-year-old granddaughter Ally was diagnosed with acute lymphoblastic leukemia (ALL).

When Aaron was diagnosed, Marcy was already battling the disease and she struck a kinship with him. Bob did, too.

“Throughout our son’s illness, Bob would bring over little gag gifts, things that would cheer Aaron up and make him laugh. Bob always felt laughter was the best medicine and he went out of his way to make our son feel better.” Dr. Whitmer said when it became evident their son was not going to recover, Aaron’s oncologist pulled them aside and said, “You need to start creating memories while Aaron is still reasonably able to do things.”

That’s what prompted Donna to book the cruise for her husband, herself, Aaron and his girlfriend.

Mills got a private plane to fly them to their South Florida port and then had another surprise when the boarded.

As Donna debated the room assignment, Dr. Whitmer said the phone rang: “It was Bob asking, ‘How you like your room?’” He had had them upgraded to the best suite at the very top of the massive ship.

“That’s what Bob did,” Whitmer said. “He was that kind of guy.” And that’s why he said this past week was so difficult for he and his wife.

Wednesday, July 15th, was the 12th anniversary of Aaron’s death.

And two days before that – on Monday – 70-year-old Bob Mills died at his home after battling growing health problems the past couple of years.

Thursday, Dan sent me a photo of his son and Bob sitting in the office from which Mills ran Synergy and Mills Development, which are his construction company and real estate development firm.

Aaron sat behind the big desk, wagging his finger as though he was lecturing Bob.

“I’ll never forget that,” Dr. Whitmer said. “Afterward he told me, ‘Dad, some day when I get well, I want to be like Bob and do great things for people.”

And Mills did a lot of great things.

His company built over $1 billion in Class A office space in Ohio, Indiana and Pennsylvania. He partnered for a good while with Sam Morgan and they developed much of the 675 corridor near the WPAFB and especially Pentagon Blvd.

Mills was also a grand supporter of Wright State athletics.

“When we were trying to build up a cadre of folks to support the program, Bob became one of the primary pillars of that,” said Mike Cusack, WSU’s former athletics director. “Yet for everything he did for us — and he was just fabulous for Wright State – what he did for the community was far more important.”

Doug Sorrell, the popular auctioneer from Miamisburg, was friends with Mills and officiated many of his fundraisers. In six events alone, he said they raised over $5.6 million.

“Here’s a guy who built up a huge portfolio of assets, but he’s not going to be remembered for this building or that one,” Sorrell said. “Everyone is going to remember him for being so extremely generous to people.”

That thought was shared by Bob Grant, who took over as WSU athletics director when Cusack retired:

“Through all his philanthropy work he’s had to have touched tens of thousands of lives in the Miami Valley.”

And I know one he touched:

Several months after his granddaughter was diagnosed with ALL, he was coaxed into running for the Leukemia and Lymphoma Society’s Man of the Year in Dayton. The winner is the one who raises the most money for cancer aid and research.

With Sorrell as his auctioneer, he put on a gala event at Fox Hill, his magnificent home in Beavercreek that’s surrounded by 50 acres of woodlands, a three-acre pond and all kinds of amenities to make it a play land for his grandkids.

I wrote about the event, which raised nearly $500,000 and was the springboard that not only made him not the local winner, but the National LLS Man of the Year. He raised more money than anyone ever had in the history of the event.

View the entire story at daytondailynews.com