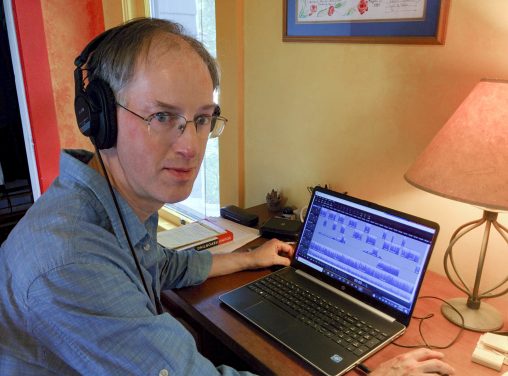 Wright State English professor David Seitz, also a producer of public radio station WYSO’s Community Voices, was honored for his story “The Room Where It Happens: Performing Hamilton In Prison.”

The biggest challenge was trying to get the prison inmates to open up when he was interviewing them. But the efforts of David Seitz, professor of English at Wright State University, resulted in a national award for the radio story he produced.

“Learning about their views of liberty, freedom and revolution from their prison lens was powerful,” said Seitz, who took second place for Best Arts Feature in Division C from the Public Media Journalists Association.

Seitz, who is a producer of public radio station WYSO’s Community Voices, won the honor for his Culture Couch story “The Room Where It Happens: Performing Hamilton In Prison.”

“David’s award is especially noteworthy because PMJA is a national association of public radio stations that has recognized David for his outstanding radio work,” said Alpana Sharma, professor and chair of the Department of English Language and Literatures.

Seitz has produced WYSO Culture Couch radio stories on the World House Choir, a choral group of over 100 singers that focuses on peace and social justice; and Yellow Springs Kids Playhouse, which for 20 years produced original children’s theater for adults. He also produced stories on high school a cappella groups, an Earlham College conference on transgender singing and chorale music; a Wright State conference on baseball, jazz and short fiction; and a Xenia community production of “The Face of Emmett Till.”

In November, a prison theater group at Marion Correctional Institution performed The Hamilton Project, 23 songs from the hip hop musical on the life of Alexander Hamilton.

Seitz did his radio story based on prison interviews with the actors and coverage of the rehearsals.

“The group decided to highlight the idea of prison and control,” Seitz said in his radio story. “The men also wanted to portray the complexity of men’s relationships in prison.”

Seitz first had to slog through a blizzard of red tape to get permission to gain access to the prison and do the interviews. When he arrived at the prison, the power in half of the facility had gone out, forcing Seitz to walk through darkened hallways. Then, his audio equipment wouldn’t work, requiring him to get special permission from prison officials to use his cellphone to get technical support from the radio station.

Seitz is pleased with the recognition the award has given him. There are four divisions for each award category. WYSO is in Division C, which is for public radio stations with between one and three staff members.

Seitz attended Boston University’s school for the arts (actress Julianne Moore was a classmate) and earned his bachelor’s degree from Brandeis University, his master’s at the University of Michigan and his Ph.D. from the University of Illinois at Chicago.

He joined the faculty at Wright State in 1998. As a professor of composition and rhetoric, he has taught writing, business writing, creative nonfiction and rhetorical theory. For most of his career he has primarily taught master’s students how to be college writing teachers.

In 2013, Seitz took a WYSO Community Voices course, which trains people to become radio producers. At the time, he was teaching a multimodal writing course at Wright State.

“My private passion for public radio has really been able to go deep into my teaching,” he said.

Seitz said his liberal arts education has been invaluable in his career.