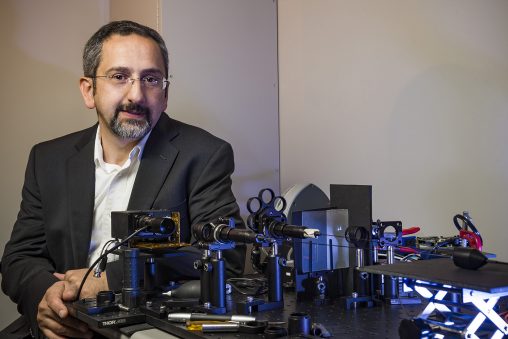 Ulas Sunar, director of the Biomedical Imaging Laboratory and associate professor in the Department of Biomedical, Industrial and Human Factors, is investigating new techniques to detect and treat small tumor nodules in ovarian cancer.

Ulas Sunar, an Ohio Research Scholar and Endowed Chair in Medical Imaging, received the five-year R01 grant from the National Cancer Institute in the National Institutes of Health (NIH).

“Our approach is expected to significantly improve detection and destruction of small tumor nodules in ovarian cancer patients and reduce side effects in normal tissue such as the intestines and liver, thereby improving patients’ survival rates and quality of life,” Sunar said.

Sunar is the director of the Biomedical Imaging Laboratory and associate professor in the Department of Biomedical, Industrial and Human Factors Engineering in the College of Engineering and Computer Science.

Sunar and his research team have built a new kind of flexible, fiber-based endoscope that can be inserted into a body cavity or organ. The endoscope, which received an NSF-Ohio iCorp commercialization grant in 2017, features quantitative fluorescence imaging that can better detect lesions in internal organs compared to conventional fluorescence imaging and other imaging methods.

Tissue tends to absorb conventional light and diminish the fluorescence imaging contrast. But the new endoscope corrects for this light attenuation, resulting in an improved fluorescence contrast so that clinicians can better delineate cancer from surrounding normal tissue. This approach also allows for quantification of absolute drug concentration at the local tumor site and normal tissue without any need for invasive methods.

“The same endoscope can be applied to oral, lung and gastrointestinal cancer diagnosis as well as brain imaging during surgery,” Sunar said.

He said a major challenge in managing advanced ovarian cancer is the presence of disseminated microscopic tumor nodules, or micrometastases, within the intraperitoneal cavity.

“Despite surgery and adjuvant chemotherapy, as many as 50% of patients can show occult disseminated disease, with a very low survival rate. Also, systemic chemotherapy can have toxic side effects,” he said. “Therefore, recent efforts have aimed at improving detection and treatment of these micrometastases.”

Sunar’s team would inject into the intraperitoneal cavity a novel chemo-photodynamic therapy drug that would accumulate in the cancer cells and give off a fluorescence when illuminated with a laser light.

“We would be able to detect very tiny tumor nodules as small as tens of microns in size that cannot be detected through visual inspection by the surgeons or any other conventional imaging,” said Sunar. “After detection, we would deliver the treatment light by increasing the laser power, which would destroy the tumors while saving the healthy tissue.”

Sunar and his team have performed preliminary studies funded by the NIH and recently published in Nature Scientific Reports. Sunar plans to extend the studies by improving the endoscope imaging capabilities such as real-time, larger field of view, improved detection sensitivity and resolution.

“We will be developing the novel endoscope hardware as well as novel deep learning-based algorithms for ultrafast imaging and therapy optimization,” said Sunar.

Sunar is collaborating with Jonathan Lovell, an associate professor of biomedical engineering at the State University of New York at Buffalo. Lovell is developing the drug. Consultants Xavier Intes, professor of biomedical engineering and co-director of the BioImaging Center at the Rensselaer Polytechnic Institute, and Lili He, assistant professor of Pediatrics at the University of Cincinnati will provide feedback and support for fast deep-learning implementation. Shashikant Lele, professor of Gynecologic Oncology at the Roswell Park Comprehensive Cancer Center in Buffalo will provide feedback for clinical translation. Yang Liu, assistant professor of statistics at Wright State, will provide statistical analysis support.