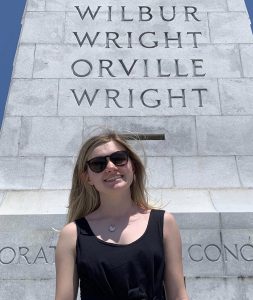 Working at a homeless shelter can be a challenge. Everywhere you turn, there are people in need.

But for Wright State University political science student Brianna Maschinot, it is a dream job.

“I didn’t know that you could realistically make a living off of helping people in the way I am at my job,” she said. “Helping people and getting them the supplies and resources they need to have a good life is truly my passion.”

Maschinot works at St. Vincent de Paul, a Catholic lay organization best known in Dayton as assisting people in need of clothing, food and shelter. She serves as a hospitality manager, solving day-to-day problems at the homeless shelter.

Maschinot grew up in Oakwood, graduating from Oakwood High School in 2017. She then attended Cedarville University to pursue a legal career.

“I quickly realized that I hated conflict and didn’t want to go to law school,” she said.

So she transferred to Wright State, where she graduated July 31 with honors, a bachelor’s degree in political science and a 3.7 grade point average.

Maschinot worked her way through college, holding three jobs all at the same time. She had two internships, one at the City of Miamisburg and the other in Montgomery County’s community and economic development division.

In addition, Maschinot performed in the University of Dayton Marching Band and Pep Band her junior year through a program offered by the Southwestern Ohio Council for Higher Education.

Maschinot credits Wayne Stark with helping her market herself and get ready for the professional world. Stark is director of workforce development for the Center for Liberal Arts Student Success (CLASS) in the College of Liberal Arts.

“I was beyond prepared for any interviews I had as well as conducting myself in the workplace because of his guidance,” she said.

Maschinot’s long-term goals are to be able to help people more with mental health issues, earn her master’s degree in public administration and become a director of some kind.

“I couldn’t have done this without the help of Wright State,” she said. “The professors were always so encouraging and asking how I was doing at my internships and if they could help in any way.”