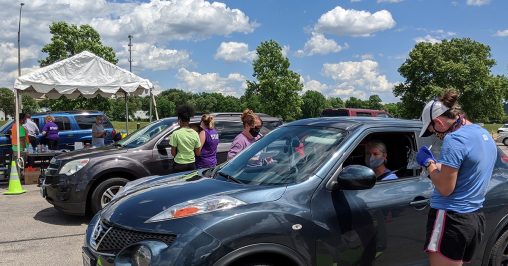 Five Rivers Health Centers, led by CEO Gina McFarlane-El, partnered with the Gov. Mike DeWine’s COVID-19 Minority Health Strike Force and the Ohio National Guard and reached out to the Boonshoft School of Medicine asking for student assistance at the testing pop-up clinics.

“Ms. Gina McFarlane-El was right there with us, putting in work, and I really appreciated her helping make these pop-up sites happen for the communities,” said Ahmed Saeed, a second-year medical student, who helped at the Greene County testing site. “We need to reach out to these communities with high-risk populations and let them know we care about them and inform them of the resources that are available.”

In total, 12 Boonshoft School of Medicine students helped at two testing locations: one location at the Greene County Health Center in Xenia and the other location at Samaritan Health Center in Dayton. The students assisted with patient intake, registration and answering questions regarding how and when patients would receive test results.

Many in the community participated in the testing. In Xenia, people were in line before the testing site opened, and students noted that people came multiple times, bringing various family members and friends because it was an opportunity to get tested without a physician’s order.

“The student volunteers at the COVID-19 testing events were extremely helpful,” said Kim Bramlage, marketing and communications manager at Five Rivers Health Centers. “We were overwhelmed at the community’s response to the pop-up testing and could not have managed without the medical students’ assistance those two days. They worked hard, in the heat and sun, to help us serve the community. We are so grateful for their service.”

“We worked alongside members of the Ohio National Guard and employees from Five Rivers Health Centers. Everyone had such a great attitude and was happy to be helping out,” said second-year medical student Jenna Frantz, who worked at both the Greene and Montgomery County testing sites.

“It was a really enjoyable experience. It makes me excited for my future in health care when I’ll have a much more hands-on role,” Frantz added.

“I was glad to be able to help the COVID effort in any way that I could,” said Brenna Lammers, a second-year student who also worked at both testing sites. “I thought it was awesome that they were offering free testing.”

Over the course of the two-day testing event, more than 2,000 people were screened.