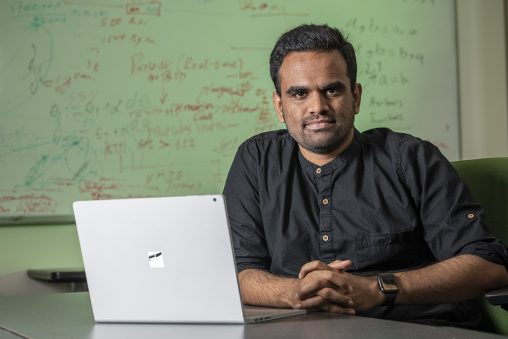 Ashutosh Shivakumar, who is pursuing his Ph.D. in computer science and engineering at Wright State, researches how to make computers more human-like in initiating conversations.

He is a self-described introvert with an ear for the nuances of the way people talk. That ability has him working on using artificial intelligence to make computers more human-like in initiating conversations.

Ashutosh Shivakumar, a Wright State University Ph.D. student in computer science and engineering, has collaborated with researchers at the Wright State Boonshoft School of Medicine and the Air Force Research Laboratory at Wright-Patterson Air Force Base.

Most recently, Shivakumar and his fellow researchers had their work published in a journal article titled “Real-time Interruption Management System for Efficient Distributed Collaboration in Multi-tasking Environments.”

The research has been accepted for virtual presentation at the Computer Supported Co-operative Works and Social Computing 2020 conference in October.

Shivakumar describes himself as an introvert who is more interested in listening than speaking.

“This aspect of my personality has filled me with endless fascination of how people initiate and make conversations,” he said. “The various tones and words we use in particular contexts to convey our intentions and feelings and how the consequential effects on human social relationships has been an object of my attention.”

Shivakumar’s travels around the country have enabled him to interact with people of different cultures and linguistic styles of speaking.

“As a computer engineer, this juxtaposition of complexity and simplicity in human communication has encouraged me to replicate the same in computers to make them more human-like in initiating conversations,” he said.

Shivakumar arrived at Wright State University in 2014 as a master’s degree student in computer engineering.

“The wide variety of courses offered by the Department of Computer Science and Engineering helped me develop an interdisciplinary approach to engineering,” he said.

In 2015, Shivakumar began working in the SMART Lab under the guidance of Yong Pei, associate professor of computer science and engineering who teaches Advanced Computer Networks.

“The environment in the SMART lab fosters creativity and critical thinking with special emphasis on freedom of expression through debate and collective consensus in our approach to cutting-edge technology development and prototyping,” said Shivakumar.

Shivakumar’s introduction to artificial intelligence began with Smart Charging, a sustainable mobility initiative at BMW Group Technology in Mountain View, California, where he worked as an intern in the spring of 2016. The pilot project involved BMW, Pacific Gas and Energy (PG&E) and 100 customers in the San Francisco area.

Artificial intelligence is often used to describe computers that mimic cognitive functions associated with the human mind such as learning and problem solving.

“AT BMW I was involved in developing a smart-charging algorithm that utilized the principles of computer science, electric mobility and electric engineering to address the problems of growing energy deficiency,” said Shivakumar. 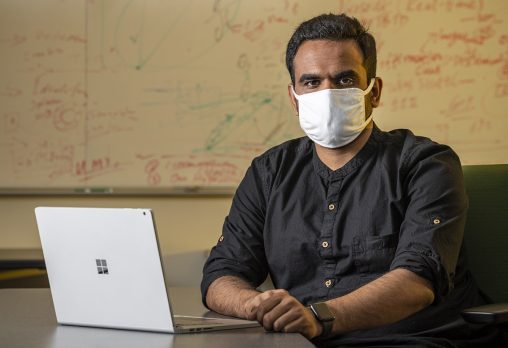 Ashutosh Shivakumar has collaborated with researchers at the Wright State Boonshoft School of Medicine and the Air Force Research Laboratory at Wright-Patterson Air Force Base.

Shivakumar’s internship experience at BMW prompted him to pursue a Ph.D. in computer science and engineering at Wright State under Pei’s guidance. His research focus is on natural language understanding and human-computer interaction for building assistive and proactive dialogue agents.

Shivakumar has collaborated with the Air Force Research Laboratory and Paul Hershberger and Dean Bricker at the Boonshoft School of Medicine, where the researchers worked on using artificial intelligence in motivational interviewing techniques used by medical practitioners.

At AFRL, Shivakumar has worked with research engineer Nia Peters to build foundational knowledge in human-computer interaction. Peters is the project sponsor/partner and co-adviser for Shivakumar’s Ph.D. dissertation.

“Ashutosh is a phenomenal Ph.D. student and researcher,” said Peters. “He asks compelling questions to inform the work he is doing. He also brings a lot of insight to our project not only from the literature, but also from his experiences and intuition. I’ve enjoyed the opportunity to engage with a student of his caliber.”