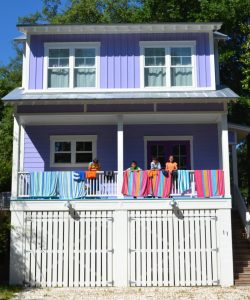 When a 30-foot-high brick wall of a house she was renovating threatened to come crashing down, Katy Haddad leaned on her engineering education from Wright State University.

The wall of the South Carolina house had been improperly supported by a concrete patio, and Haddad had to quickly figure out how to build a support under the wall to keep it from collapsing. Work on the project was halted while Haddad researched the material properties of a steel beam she wanted to use as a support to make sure it was strong enough and even stronger than necessary.

“Once I figured out which steel beam was safe to use, I showed my calculations to the contractor and he felt comfortable that it would work,” she said. “They were able to fix the problem.”

Haddad earned her bachelor’s degree in mechanical engineering from Wright State in 2002 and often uses that knowledge. She says the structural mechanics, the design and drafting software, and the 2D drawing skills she learned in engineering have directly helped her in constructing and renovating homes.

“I draw every one of my projects by taking careful measurements and then drawing different elevations and floorplans down to the quarter of an inch,” she said. “This is essential when planning a good renovation.”

She said structural mechanics is important because it helps when looking at a building and making decisions.

“Do you know if it is safe to tear out a wall?” she said. “Can you easily determine when a support is load-bearing?”

In 2011, Haddad decided to attempt her dream building project — a beach house — and bought a tiny shack on Tybee Island, Georgia.

“The shack was completely rotten and unsalvageable, so I tore it down,” she said.

Haddad salvaged the antique plumbing fixtures and refinished them. She also hired a general contractor and obtained all of the necessary permits.

“The restrictions of building in a flood zone with hurricane requirements are intense,” she said. 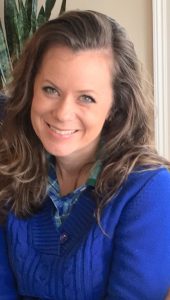 Katy Haddad earned her bachelor’s degree in mechanical engineering from Wright State in 2002.

Haddad said the toughest part was having little control over the process.

“When you decide to hire others and do something huge that requires a lot of permits and a lot of people, you give up control and that is very nerve-wracking,” she said. “I like renovating houses on my own, with my own tools, and my own skills because then I get to manage it. It moves as quickly or as slowly as I want.”

Haddad said the most gratifying part of the Tybee project was getting to the end and finally being able to enjoy it. She especially likes having the beach house painted bright purple.

“All of my family were able to spend time there before I sold it, and it was a memory and experience we cherish,” she said. “It was very unique.”

Katy (Slominski) Haddad, who grew up in Springboro, became interested in building things at a young age.

“My family was full of engineers and pilots, and my parents recognized that I was analytical and encouraged me to pursue engineering as a career,” she said.

After graduating from Springboro High School in 1997, Haddad attended the University of New Mexico but transferred to Wright State after her first year to study engineering. She interned at the Delphi Automotive brake plant.

After earning her bachelor’s degree in mechanical engineering from Wright State, she moved to Maryland and then to South Carolina, where she eventually worked as a structural engineer in a fiberglass factory. While living in Maryland, Haddad had time to expand her carpentry skills. In the first house she and her husband owned, she renovated a bathroom and finished the basement.

“I learned plumbing, tiling and why some jobs are better to hire out, like putting up drywall,” she said.

Haddad is renovating a ruined mansion on a lake in South Carolina.

“I’ve had to learn some new skills because it was built from steel and concrete,” she said. “That requires more robust tools. I bought my very first jackhammer for this house.”

As a hobby, Haddad is preparing to build a chicken coop that will protect the animals from eagles and raccoons.

“I wish I could build it out of fiberglass but there’s that other engineering skill that comes in handy — knowing when there should be cost constraints and when you might be over-designing something,” she said. “But in a perfect world, all chicken coops would be fiberglass and 304 stainless steel.”

Haddad said the engineering program at Wright State gave her the tools and confidence to take on big projects and not feel like she had to ask others to do the thinking for her.

“You don’t finish an engineering program if you’re easily discouraged or intimidated, and you don’t take huge risks in construction and real estate without courage,” she said. “It starts with learning how to think, how to problem-solve, how to do risk assessment, but it ends in courage and perseverance.”