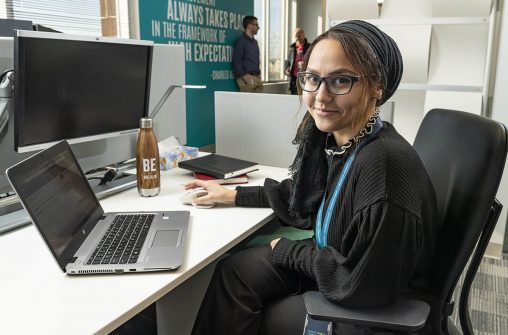 Haneen Barri turned an internship with Booz Allen Hamilton into a full-time job after graduating from Wright State with a bachelor’s degree in computer science.

It only took one class. Shortly after arriving at Wright State University, Haneen Barri had been torn between majoring in business or engineering.

“However, after taking one computer programming course the spring of my freshman year, I knew that was what I wanted to pursue,” she said.

Today, Barri has a bachelor’s degree in computer science and a full-time job at Booz Allen Hamilton, a management and information technology consulting firm that employs more than 27,000 workers around the world.

Barri began interning for Booz Allen Hamilton in 2018, working as a Summer Games intern. She was on a team with four other interns assigned to create solutions for the real-world problems of clients.

“Our specific task was to help Homefull combat food deserts in urban areas to decrease the number of citizens with a lack of access to nutritional food,” she said. “We helped the nonprofit organization by creating an inventory system to keep track of their produce to better serve the community.”

After graduating from Wright State in 2019 with a bachelor’s degree in computer science, a minor in business and mathematics, and a certificate in cyber security, Barri was hired full time by Booz Allen. She is a software engineer and consultant.

“I love the environment of working at Booz Allen. It has a very lively and friendly atmosphere,” she said. “The most challenging part, for me, was improving on my public speaking skills so that I could better reach my clients.”

Barri grew up in Bellbrook. Her father is a computer engineer and her mother was a teacher. Barri attended ECOT, the Electronic Classroom of Tomorrow, which gave her a flexible schedule and enabled her to take college courses while in high school and still graduate on time, in 2015. Then it was on to Wright State.

Barri said Wright State helped get her to where she is today.

“It was at a Wright State event that I was introduced to Booz Allen and then later contacted for an interview for my first internship there,” she said. “The corporate open houses and job fairs at Wright State do a great job at helping you get your foot in the door.”