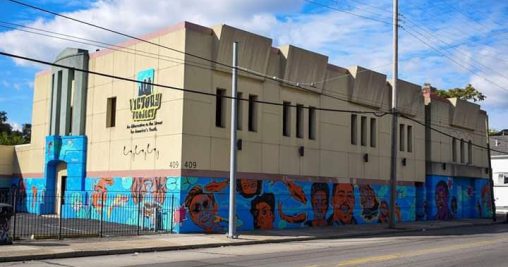 “The Land of Funk” is one. “Signs to a Creative Future” is another. About 20 colorful murals on the sides of buildings and at community and other centers around Dayton have been brushstroked by youths in the juvenile justice system.

Some of the murals came to life under the direction of Shirley Tucker, who earned a bachelor’s degree in fine arts from Wright State University. Tucker is a professional artist who specializes in graphic design, acrylic oil paintings and murals. She uses her artistic abilities to give adolescents creative outlets and coping skills.

“The most gratifying part of my job is working with youth to overcome life challenges in a positive way, encouraging them to become motivated to create artwork and offering opportunities to them for a positive future,” she said.

HAALO is a collaboration between the juvenile court and the K12 Gallery & TEJAS, an artist-centered regional visual arts center offering innovative programs for all ages.

“The program was designed to expose court-involved youth to different mediums of art while building assets, instilling life skills and offering them opportunities to give back to their community,” said Tucker. “Both the HAALO and SAG art programs encourage the youth to nurture their artistic talents in a safe and supportive environment.”

The HAALO mural projects began in 2009. In 2011, six master replica mural paintings were installed at the corner of Third and Sears streets in downtown Dayton.

The murals are colorful, powerful and in some cases sweeping. “The Land of Funk” mural, for instance, has 21 panels. The murals can be found in the Wright-Dunbar neighborhood, at the Wesley Community Center, in the Ft. McKinley Garden and at the Juvenile Justice Center.

Due to the COVID-19 pandemic, the program was unable to work on a mural project over the summer. 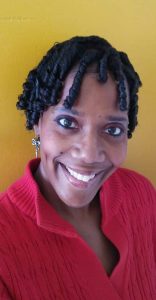 Tucker grew up in Dayton and graduated from Meadowdale High School in 1982, where she had become interested in art.

She earned her associate of arts degree in 1984 from Rio Grande College, studied graphic design at Bowling Green State University and in 1989 earned her Bachelor of Fine Arts from Wright State.

“The Wright State art program exposed me to building tools, taught me different creative techniques and how to apply those tools for the execution within creating art,” she said.

After graduating from Wright State, Tucker worked as a visual merchandiser for the Elder-Beerman Corp. and then began working for Montgomery County Juvenile Court as a deputy clerk. She would later become coordinator of work details, supervising youths age 11 to 20 at work sites.

Tucker was honored for her work with an Ohio Senate citation from Sen. Stephen A. Huffman and has been featured in The Dayton Weekly News. She said the most challenging part of her job is accepting that she may not be able to reach every child.