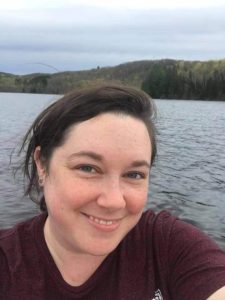 Cori Lohstroh, who is pursuing a master’s degree in rhetoric and writing from Wright State, combines her passions for the environment and writing.

When she goes on a hike, Cori Lohstroh takes garbage bags so she can pick up trash along the way.

“I’m passionate about sustainability and giving back to the environment,” says Lohstroh, who is pursuing a master’s degree in rhetoric and writing from Wright State University.

But picking up a few discarded cans and bottles is nothing compared to Lohstroh’s latest environmental protection move. She used her writing skills to help secure a major federal grant that will enable a local company to advance environmentally friendly weed-killing technology to help farmers.

Lohstroh, student director of technical communication and proposals at The ONEIL Center at Wright State University, wrote the proposal for Global Neighbor Inc. The Centerville company uses directed energy, or high-intensity light, to kill weeds and make weed seeds unviable without the use of harmful herbicides. The company has commercialized the Weederase, a tool sold for residential use, and has worked to expand the technology for agricultural use.

It was a big boost when Lohstroh helped write a proposal that resulted in a major grant from the U.S. Department of Agriculture. The grant supports Global Neighbor’s efforts to make herbicide-resistant weed seeds non-viable in a way that is cost effective for farmers. The solution will help reduce herbicide usage by killing the weeds when they are seeds.

Lohstroh said the biggest challenge in writing the grant proposal came when trying to compile a broad profit-and-loss comparison for organic and non-organic soybean farms.

“I did not foresee farms mostly being privately owned,” she said. “In the end, after reaching out to some experts from Cornell University and the U.S. Department of Agriculture, we were able to get enough information to at least illustrate the comparison through production trends.”

“The ONEIL Center did such a great job,” said Jackson. “We had the content and presentation that made for a winning formula.”

Brandy Foster, executive director of The ONEIL Center, said that when Lohstroh learned of the award she became emotional because she so strongly believes in what Global Neighbor was proposing — an alternative to dangerous chemicals.

“It was really gratifying to me not only to see Cori have success with a proposal but to see how that experience really made her feel the impact of her work and how it can make an impact in the world,” said Foster. “That type of validation can really provide the foundation of her entire career after she graduates.”

Lohstroh grew up in Cincinnati, graduating from Colerain High School in 2005. She worked in restaurant management and then earned her associate degree in English from Sinclair Community College before attending Wright State.

“I was looking for an affordable college with a supportive community where I could continue to learn and grow,” she said. “I found that in Wright State.”

The idea of combining environmentalism with writing occurred when Lohstroh took an American literature class at Sinclair that included an eco-criticism module.

“We discussed works like Rachel Carson’s ‘Silent Spring’ and we read ecopoetry and climate fiction,” she said. “It was then that I realized my passion for the environment and my passion for writing have the capacity to overlap.”

Lohstroh earned her bachelor’s degree in professional and technical writing from Wright State and is now pursuing her master’s in rhetoric and writing.

The ONEIL Center, which opened in 2017 in the Neuroscience Engineering Collaboration Building, provides an innovative transdisciplinary experiential learning workspace that functions as a classroom, incubator, small business, social impact organization and research lab in a new model of workforce development. The center was launched thanks to a $675,000 gift from O’Neil and Associates, Inc., a Dayton-area company that develops technical publications, training and other product support materials for equipment manufacturers globally.

The ONEIL Center serves as a workforce pipeline to the Dayton region. It provides internships to students that connect them to researchers, businesses and other organizations.

Lohstroh said her three years at The ONEIL Center have been a treasure trove of experiential learning opportunities.

“I’ve been able to continue expanding my editing, project management and document design skills while also accessing brand new opportunities like proposal writing,” she said. “Thanks to Brandy Foster’s mentorship and the center’s multidisciplinary culture, I’ve been able to participate at conferences and contribute to projects in fields I wouldn’t necessarily have had access to, such as artificial intelligence, human performance research and neuroscience.”