Just a Pair of Shoes 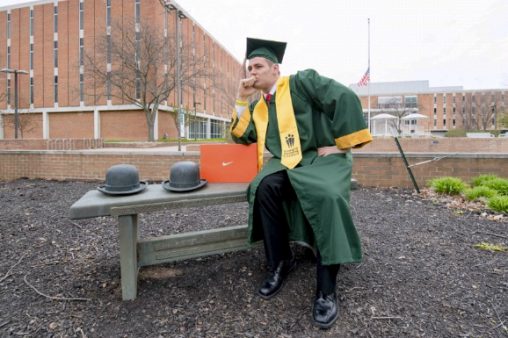 Marketing graduate Matt Cline runs his own shoe company and a nonprofit organization that provides new shoes to schoolchildren in need.

He was bullied in school as a young boy, in part because he couldn’t afford a nice pair of shoes. So Matt Cline earned money mowing lawns and bought his first pair of Nikes. His confidence soared.

Today, Cline, who graduated from Wright State University with a bachelor’s degree in marketing, runs both his own shoe company and a nonprofit organization that provides new shoes to young students in need.

The nonprofit, called Just a Pair of Shoes, is focused on one mission — making sure every child in the program has a new pair of shoes that will foster confidence and a sense of belonging. The organization’s name was inspired by the belief that it’s not just a pair of shoes, it’s what you do in them.

“It’s joy, it’s hope, it’s confidence, and it’s comfort in knowing someone believes in you,” said Cline. “From personal experience, I know that a nice pair of shoes can really make a positive change in a child’s life. With a nice pair of shoes, you get bullied less, they are a conversation starter, and they just give you confidence. I truly believe that if you give a kid confidence, they can do anything.”

Cline spent his early days in New Port Richey, Florida, and moved to Fairborn when he was in the second grade. After graduating from Fairborn High School in 2013, he enrolled at Wright State.

“What I really liked about Wright State was how nice the campus is and the resources available,” he said. “Wright State is so welcoming and peaceful outside.”

Cline had started a Twitter account sharing motivational quotes that attracted 117,000 followers at its peak. Then he began getting paid to tweet ESPN articles on the Women’s National Basketball Association.

Cline came to realize that he enjoyed creating marketing strategies for businesses and decided to major in marketing. During his second year at Wright State, he started a business that eventually became an online shoe store.

“I was going to class by day and listing shoes for sale online by night,” he said. “I never had any intention of running my own business. My idea was I would get a degree, find a nice job and enjoy life in the marketing field. God had other plans, and today I am really happy with the path I took.” 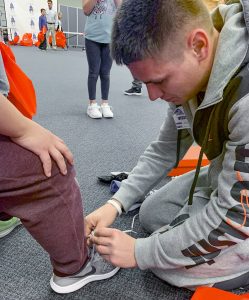 The seeds of Just a Pair of Shoes were planted at Wright State when Matt Cline was a student.

Cline is the owner of Success Incline, an online shoe company with no storefront and few local sales. About 15% of its business is to overseas customers.

“We have a guy in Malaysia who orders soccer cleats every month and a guy in the UK who orders a wide range of products,” he said. “Last year we sold a little over 8,000 pairs of shoes without meeting a customer, and in 2020 we are hoping to meet a goal of 10,000 shoes sold.”

A percentage of the company’s profits goes to Just a Pair of Shoes, which Cline started in 2019. The seeds were planted at Wright State when Cline heard a professor say something to the effect of “be the person you needed when you were younger.”

So Cline volunteered for Big Brothers/Big Sisters and began mentoring a fifth grader. One day he gave the boy some of his old shoes.

“His level of excitement was something I can’t forget,” said Cline.

Then Cline learned from a teacher that a student in her class wore football cleats to school and would slide all around the hallway. So he got a list from the principal of 13 students who needed shoes.

“I bought new shoes for them, but three of the students didn’t have socks when they tried on the shoes,” he recalled. “At that point I realized there was a bigger need here and I was going to need some help.”

In 2018, Cline and his friends purchased 33 pairs of Nikes for students. The following year, with the help of the Fairborn community, they purchased 55 pairs of shoes for children in need. Cline’s nonprofit was born.

A year earlier, Cline had graduated from Wright State with a bachelor’s degree in marketing. He says he uses what he learned in his accounting and supply chain management classes in his business every day.

“I think just having a top-notch business school and fantastic professors made the difference — from Career Services, scholarship programs, hands-on activities, the right technology resources and so many great people to help guide you in the right direction,” he said. “There is so much opportunity at Wright State. You just have to get involved.”

One of his favorite experiences at Wright State was being in Emerging Leaders, a program for marketing students who are paired with leaders of large companies in the area.

“You get one of them as a mentor, and they show you a day in their life at their company, offer advice and help you on your journey,” he said. “I still keep in contact with some of the mentors in that program today.”

Charles Gulas, professor of marketing, had Cline in one of his classes.

“In over 20 years of university teaching experience, I have never met a student who is harder working or more driven than Matt,” said Gulas. “He has the unique ability to see the obstacles blocking his goals, but to not be discouraged by them. He rises to any challenge. I think that it is very likely that he will soon rank among the top entrepreneurs in the region.”

All of the proceeds donated to Just a Pair of Shoes help buy a new pair of Nikes and a few pair of socks for each child in a selected school.

“I sit down with the kids and talk about the importance of higher education, doing their homework, trying sports and being a good son or daughter or friend,” Cline said.

The COVID-19 pandemic has restricted recent efforts to distribute shoes. The next distribution is scheduled for spring.

“The most gratifying thing is seeing the excitement and smiles of the kids in their new shoes,” said Cline. “All of the volunteers get to share the same feeling. The kids think they can run a little faster and jump a little higher in their new shoes. It’s something you have to see.”