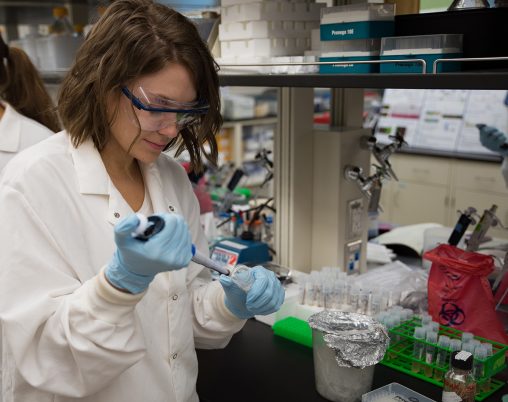 Christina Davis, a biochemistry and molecular biology major at Wright State, works as a research assistant at the Air Force Research Laboratory.

She will be Wright State University’s Dayton-to-Singapore connection. Christina Davis, a biochemistry and molecular biology major, has spent the past three years conducting research at Wright-Patterson Air Force Base. Now she has been selected to participate in the Asian Office of Aerospace Research and Development International Student Exchange Program in Singapore.

Davis has worked as a research assistant at the Air Force Research Laboratory as part of her job with UES, Inc., for which she earns credit hours at Wright State. She works in the 711th Human Performance Wing under the direction of Michael Goodson, Amy Breedon and Blake Stamps.

“I’ve worked on a range of molecular biology and microbial engineering projects and have had significant exposure to a variety of interdisciplinary techniques and topics, including cell-free protein synthesis and the role of the microbiome on human performance,” Davis said. “My job has not only grown my scientific knowledge but has also helped me expand my horizons in critical thinking and problem-solving.”

Under the student exchange program, Davis will spend 10 weeks next summer at the National University of Singapore in the laboratory of Matthew Wook Chang, who has made internationally recognized contributions in the field of synthetic biology. The university is well-known for its research strengths in engineering, life sciences and biomedicine, social sciences and natural sciences.

“I will be gaining experience in an advanced engineered probiotic laboratory and training in techniques applicable to AFRL,” said Davis.

Davis grew up in Beavercreek and graduated from Carroll High School. She was part of a high school team that competed in the International Genetically Engineered Machine Competition sponsored by the Massachusetts Institute of Technology. Davis’ team, which presented the concept of a pill designed to prevent or minimize bacterial illness in deployed military personnel, was one of two U.S. high school teams that won gold medals in the 300-plus team competition.

Davis’ mother, Cathy Davis, graduated from the Wright State College of Business with both her bachelor’s and master’s degrees. Cathy has worked for the university for over 30 years and serves as programs director of College Credit Plus. She and her husband met at Wright State.

“It was an easy decision for me to choose Wright State after seeing the great education and experience they had at the university and the support they still show for Wright State to this day,” said Christina.

Davis decided to study biochemistry and molecular biology because she wanted to understand the chemical processes within a living organism. 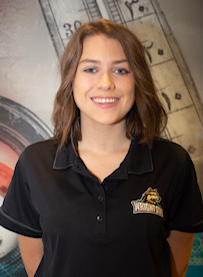 After graduation, Christina Davis plans to pursue a Ph.D. in synthetic biology and biotechnology.

She was part of the initial class to enter the Biochemistry and Molecular Biology Program in the College of Science and Mathematics. Her fellow classmates became a tight-knit group who supported each other through thick and thin.

“The administration and faculty of this department are constantly working with us and talking with us,” said Davis. “They are curious about your next steps and how they can help you and are always more than willing to give some support.”

Davis said an especially memorable experience for her at Wright State was Innovation Weekend, an opportunity for students to try to solve real-world problems.

“This weekend allowed students to be innovative with no restrictions on thought processes and to witness critical thinking at its finest,” she said. “It taught us how to work most efficiently in a collaborative atmosphere, which is important for students preparing to enter the workforce. And it taught many valuable skills that students cannot receive within class lectures.”

Davis has been involved in leadership roles on the Dean’s Advisory Board in the College of Science and Mathematics, where she took an active role in retention, experiential learning and social event planning.

She has attended four conferences around the country, where she shared her research, learned about other cutting-edge research and took advantage of networking opportunities.

Davis said what keeps her at Wright State is the continued support for her career, aspirations and the enormous number of research opportunities.

“Dayton is a hub of research from Wright State University labs, numerous DOD contractors and the number of careers at Wright-Patterson Air Force Base,” she said. “I believe the Dayton area gives me real-world experiences not available in other parts of the state or the country.”

After graduation, Davis plans to pursue a Ph.D. in synthetic biology and biotechnology.

“I cannot thank the university and the college enough for helping me prepare for the future workforce,” she said. “I am inspired to work hard now so I can do more in my future and accomplish the goals I have.”