It is part of a collaboration between the College of Nursing and Health and the College of Engineering and Computer Science that involves head-mounted augmented reality devices developed with a RAPIDS grant from the Ohio Department of Higher Education.

Augmented reality is an interactive experience in which objects that reside in the real world are enhanced by computer-generated visual and auditory displays.

The technology was demonstrated in the nursing college’s Simulation Lab, which features sophisticated, high-tech mannequins capable of mimicking a vast range of illnesses and injuries.

Buttons on the screen of the headset device enable users to control the scenarios they want to see, whether it be the heart, lungs, ribs or any combination of the three.

As a nursing student straps on the headset and gazes down at the mannequin, virtual, lifelike lungs appear inside the chest expanding, contracting and whooshing as they fill with air. The application offers five different lung sounds, including bronchial, tracheal and wheezing. It can even simulate a collapsed lung. The click of a button adds a red, blood-pumping heart with a thunderous thump.

“It’s very convincing when you actually see everything in action,” said Thomas Wischgoll, the grant program director and professor of computer science who wrote the grant with input from Sherry Farra, professor of nursing.

The augmented reality technology is being used in a pilot study at Wright State led by Cindra Holland, associate professor of nursing. Ten nursing students from Holland’s class have used the device so far.

Holland said the technology is “phenomenal” and will help students apply what they’ve learned in class and enhance critical thinking.

“It helps them actually visualize what’s going on inside the body when they are performing their different assessment techniques,” she said. “They can actually see the intercostal spaces, which are the spaces between each rib. They can know exactly where to lay their stethoscope when they’re listening for heart sounds, lung sounds.”

Holland said the device can also be used on a live person. 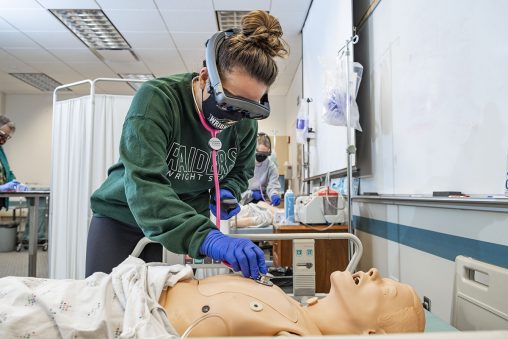 “The overlay for the chest, the rib cage, the lung and the heart can actually be visualized over any person as well as a mannequin,” she said.

Holland believes the technology can be used by students in many areas of nursing.

“We’ve even dreamed about this being utilized by them in an OB course where they can actually see a baby inside the uterus,” she said.

Wischgoll said the augmented reality headsets are universal and could be used by students in many different fields.

The headset’s computer program, called Augmented Organs, was designed by Suneesh Menon, a computer science and engineering Ph.D. student who has worked on the technology for more than two years. Under the direction of Wischgoll, Menon first designed the program for use in surgery, converting information from CT scans of patients to 3D models and adding it to the application.

“So surgeons in the OR will actually be able to visualize the patient’s rib cage as though it’s outside the body,” he said. “This way they can see where the fractures are present before they even perform an incision on the patient.”

Menon is working to add more virtual organs, arteries and veins to the program for the student nurses.

“We are so lucky to have this partnership with Computer Science and Engineering because it is adding something that other universities don’t have in their simulation departments,” said Farra. “It’s really going to take us to the next level.”

Marlene Stuber, clinical instructor and director of simulation in the College of Nursing and Health, was involved in all phases of the demonstration, including ensuring that all COVID-19 safety procedures were followed.

Farra said the feedback from nursing students has been overwhelmingly positive.

“I think it’s really going to enhance learning,” she said. “It’s one thing to listen with your stethoscope on someone’s chest, but to be able to see what’s going on inside is huge in terms of making links.”