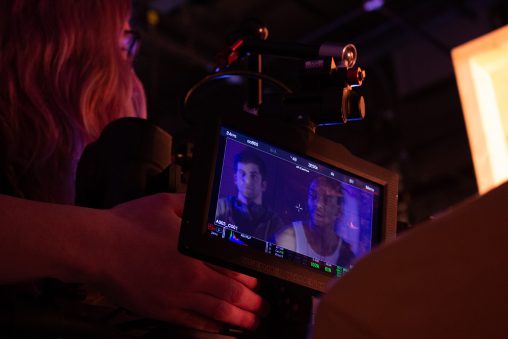 Because the pandemic forced film and television production to largely shut down, the Motion Pictures Program was able to organize lectures by a record number of seven working professionals who shared their expertise with Wright State’s emerging filmmakers and film scholars.

“Despite the challenges presented by the pandemic, the Motion Picture Production Area (MoPix) has been a hive of activity this semester. MoPix faculty have found innovative and creative ways to engage our B.A. and B.F.A. students within majors that typically demand a significant amount of hands-on training and in-class screenings,” said Simmons, who graduated from Wright State in 1999 with a bachelor’s degree in motion pictures production.

Guest speakers participated on Zoom in Simmons’ Writing and Directing the Short Film course and in the Post-Production course taught by Jeremy Bolden, an instructor in the Motion Pictures Program.

“From the beginning of the shutdown, motion pictures faculty committed to innovating in our virtual classrooms in ways that continue our tradition of excellence in professional training,” Simmons said. “We are incredibly proud of the work our students, staff and faculty were able to accomplish this semester under extraordinary circumstances.”

Simmons said motion pictures faculty also want to be innovators in what film education looks like during the pandemic. She cited the program’s virtual Doc Night as another example of how the program achieved that goal. Doc Night, which showcases the best short student documentaries by junior film students, will take place on Thursday, Dec. 10, from 6:30 to 9 p.m. on Twitch at twitch.tv/wsudocnight2020.