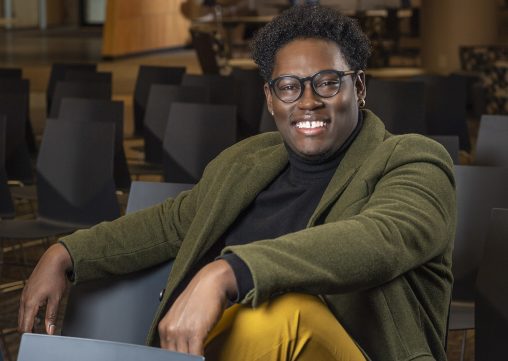 Christensen Oninku, who graduated in May with a bachelor’s degree in communication studies and pre-law, works for a law firm, is writing two screenplays and is designing a fashion collection.

New York City has always been a dazzling swirl of fashion, film and politics. And despite the stifling grip of the COVID-19 pandemic, Wright State University alumnus Christensen Oninku continues to point his career arrow at the Big Apple.

“I have three passions — politics, film and fashion,” said Oninku, who earned his bachelor’s degree in communication studies and pre-law from Wright State in May.

During his time at Wright State, Oninku dabbled in all three of those passions. He designed a shirt, had a role in an independent film and interned at a legislative office.

“I want to keep that momentum and feel like New York is home for all of that,” he said before graduating.

Although he has had to put his plans to move to New York on pause because of the pandemic, he intends to move there sometime next spring.

Oninku now works for a Columbus law firm, helping prepare documents for filing with the courts. He is writing two screenplays, one about survivor’s guilt and the other a love story. He plans to shop them around in New York after he arrives.

He has also been developing a fashion collection titled “If You Listen Closely, You’ll Hear the Happy Face of Ache.” Oninku said the collection is a sub-genre of streetwear. It consists of jeans, chinos, a cable-knit sweater, a worker’s jacket, a hat, a bag and shirts, including a “Five Stages of Grief” shirt.

“These are art pieces. There is a heavy attention to detail,” he said.

The collection is designed to tell a story and create an emotional attachment. It revolves around the theme of a family being driven apart but then finding a sense of resilience, hope and prosperity.

Oninku plans to shop the collection around New York and then do a major release at the end of 2021.

Oninku, whose father is from the Africa nation of Ghana, grew up in Dayton and attended Stivers School for the Arts, where he studied creative writing. He went from writing scary stories to novels and then to poetry.

He also founded with his friends the Midwest Movement, a group that staged art, dance, singing and poetry shows in the area.

After graduating from Stivers, Oninku enrolled at Sinclair Community College and transferred to Wright State.

Oninku credits his success to the support of faculty, family and friends. And he is thrilled with the fact that he has a liberal arts degree.

“I think inadvertently liberal arts runs the world,” he said. “Minimizing the value of liberal arts is very detrimental to society.”

Melissa Spirek, professor of communication, said Oninku is remarkable in how he blends social sciences with the arts. He is also a humble person who doesn’t like to brag about his achievements, she said.

“He was one of those students who bridges theory to practice and always goes beyond the call of duty,” she said. “He is a gentle soul who just blows the doors off of everything.” 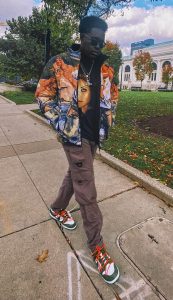 Christensen Oninku has developed a fashion collection titled “If You Listen Closely, You’ll Hear the Happy Face of Ache.”

For his project in Spirek’s Research and Methods course, Oninku traveled to Flint, Michigan, to interview residents about the public health crisis resulting from elevated levels of lead in the water supply. He later took pallets of donated bottled water to Flint, all the while working at a local grocery store and excelling in the classroom.

Oninku fell in love with politics while in high school. That interest was cemented in the summer of 2013 during a family vacation to Florida when he insisted on stopping in Sanford, where Trayvon Martin, a 17-year-old African American high school student, was killed by a neighborhood watch coordinator.

“It really just opened up my eyes to the bigotry and injustice in the system and the world,” said Oninku. “I don’t want to be a politician, but I want to change laws. I know there are a lot of laws that were put in place to discriminate against people of color.”

In the summer of 2019, Oninku was selected to intern at the Ohio Innocence Project, which works to free prison inmates wrongfully convicted. He also gained insight into the crafting and impact of laws while doing constituent work in a legislative office during an internship that ended in June.

“That experience was great,” Oninku said. “It taught me a lot about politics.”

Oninku’s interest in politics has also influenced his interest in fashion and film. After meeting the director at the premiere of a local independent film while he was a student at Wright State, Oninku landed a part in the third part of the trilogy.

“It’s about a re-imagined society,” he said. “We look at the environment of prisoners but without the stigma that we have of prisoners.”

Oninku said he had always aspired to be an actor.