When he’s not behind a camera at Wright State University, he’s behind one at a television station. And he says he’s getting a solid education at both places.

Joey Larkin is a junior in Wright State’s Motion Pictures Production Program and works part-time as a photographer, editor and production producer on WDTN’s “Living Dayton,” a live news and lifestyle show that airs weekdays at noon.

“Wright State has helped me way more with the theory aspect of things,” said Larkin. “I think WDTN has been a good companion, teaching me all the production aspects.”

Larkin, who wants to become a documentary filmmaker, says he will probably initially have to fund his own film projects following graduation and try to get noticed by producers and studios.

“I’ll have to work my way up and that’s what I’m doing right now,” he said. “Hopefully I can accomplish my dreams.”

“Film is the most important medium of art in my opinion,” he said. “Film’s always been there for me so I feel the least I can do is contribute to it.”

Larkin got his first taste of media work at Springboro High School, where he was in the graphic design program.

“I definitely tried negotiating with my teacher to do film and videos because that’s what I was interested in,” he said.

One reason Larkin was drawn to Wright State was because his mother, who works in the financial aid department at Sinclair Community College, graduated from Wright State in 2010 with a degree in organizational leadership. But he also knew the university had a good film program. 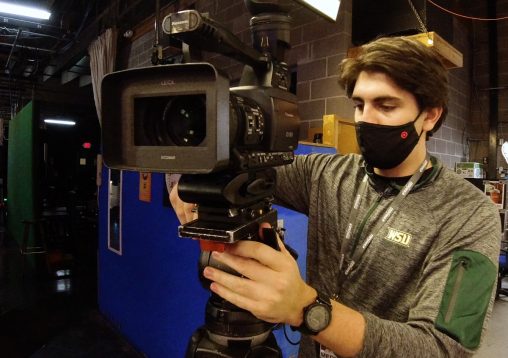 Through the Wright State Motion Pictures Program and a job on “Living Dayton,” Joey Larkin is training to become a documentary filmmaker. (Video by Kris Sproles)

“A big part of why I joined Wright State was because of the Tom Hanks program and the attention that it gets,” he said. “Anytime I talk to people about Wright State and the film program, everyone says ‘Tom Hanks. Tom Hanks.’”

In 2016, Hanks visited Wright State to dedicate the Tom Hanks Center for Motion Pictures, saying he hopes the center inspires students to do the hard work necessary to launch film careers.

Larkin said Wright State has been great in teaching film theory and enabling him to understand the motivation and why movies are made. During Fall Semester, he directed three short documentary films on various themes.

“I think that’s the best experience I’ve gotten in school so far,” he said. “I’m going to show those to future employers or people I want to work with in the future. I’m very proud of them. I spent a lot of time on them.”

This semester, Larkin has checked out cameras and other equipment at Wright State to go out and shoot video.

“I think I’m going to make some good stuff this semester,” he said. “Right now, it’s just satisfying to make something from nothing. I have a camera, I have a script, and in a few months I have a movie made.”

While at Wright State, Larkin has weathered a faculty strike and the impact of the COVID-19 pandemic. He believes those challenges have made him a stronger student.

“Throwing all of those obstacles at me, I actually ended up doing way better than I probably ever could have given normal circumstances,” he said. “I think the danger of losing schooling — the danger of all that — made me want to work harder and put things in perspective like jobs I needed to get.”

On “Living Dayton,” Larkin is a jack-of-all-trades, shooting packages as well as segments for clients and editing.

“WDTN ‘Living Dayton’ has taught me so much of the production aspect that I don’t think any school would be able to do because it’s throwing me out in the real world,” he said. “I’m working with real people in the industry. I’m meeting tons of people. I’m getting tons of connections. I’m learning how to live broadcast.”

Larkin has also learned how to work under deadline pressure at WDTN.

“At school, I’m working very quickly because I have that imaginary deadline in my head from ‘Living Dayton,’” he said.

Larkin was at the Tom Hanks Center for Motion Pictures in 2020 when Julia Reichert, professor emeritus, and Steve Bognar, a former motion pictures faculty member and alumnus, visited with students after winning the Oscar for Best Documentary Feature for “American Factory.” Larkin, who got to hold the Oscar, called the experience educational and surreal.

“I thought these are two normal people who live right down the road from us and they are at the point where I want to be someday,” he said. “They have this legendary award that I want someday and it’s all right in front of me. It made me realize it’s all attainable.”