Bicycling in Hawaii was paradise for Mike Bisig. So the two-time Wright State University music education graduate works to bring a bit of it back to his native Ohio with a ramp-rich indoor bicycle park in Dayton.

Bisig is owner and operator of Mike’s Bike Park, a 70,000-square-foot warehouse with two floors of indoor riding located at 1300 E. First St. in Dayton. Bicycles, scooters, skateboards, inline skates and more are permitted at the park, which is open year-round.

“Mike’s Bike Park is a very special place,” he said. “There is no other place like it in the area, and my team works very hard to make it a fun place for people of all skill levels.”

Bisig said Mike’s has become a hub for incredible things in downtown Dayton and that he is always looking for new ways to give customers an amazing experience.

“We have riders as young as 2 years old enjoying the park alongside, seasoned riders who are enjoying their retirement, and everyone in between,” he said. “We have world-champion cyclists riding as well as people who just love to ride a bike in their neighborhoods.”

In addition to the park, the facility also features a state-of-the-art, full-service bicycle shop and the newly opened New Challenger Arcade, which boasts vintage arcade, pinball and Nintendo games.

It’s all music to his ears, says Bisig, who knows a thing or two about music. Music has always been a big part of his world, starting when he was a young boy. 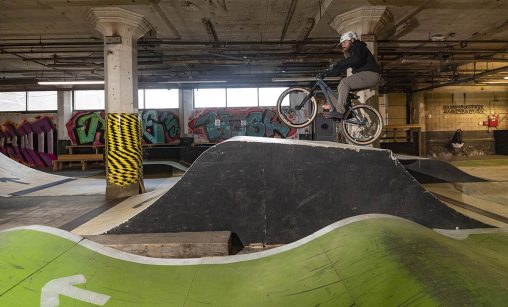 “My parents always listened to music in the car and at home,” said Bisig, who grew up in Wilmington. “Mom would play Donna Summer, and Dad would blast Bob Seger from vintage stereo systems.”

Bisig began playing the saxophone in sixth grade and became pretty accomplished at it by his sophomore year at Wilmington High School, where he played in the concert, marching and jazz bands. By the time he was a senior, he was performing in every top ensemble at school and realized he wanted to pursue music as a career.

After graduating in 1996, he came to Wright State to pursue music education, attracted by the campus and professors in the School of Music.

“Some of the other places I auditioned had great music programs, but Wright State had a wonderful music program and I felt very warm and welcomed in all of my interactions with the music faculty,” he said.

Bisig performed in many of Wright State’s ensembles, including the Wind Symphony, Concert Band, Jazz Band, Jazz Combo and the Faculty Jazz Combo.

“It was a great experience to be able to simultaneously gain critical knowledge while being able to apply that knowledge in high-quality performing ensembles,” he said. “I feel that Wright State gave me more opportunities to get real-world performance experience than I would have had at other music schools.”

Bisig said he has always been a hard worker, but that Wright State pushed him to push himself to an even higher level.

“It was important to my professors that I set the bar very high and that I find ways to achieve the goals that I set for myself,” he said. “This is something I continue to this day.”

Bisig earned two degrees in music education at Wright State, his bachelor’s in 2000 and his master’s in 2005. Following graduation, he worked as a band director in several Ohio school districts, including spending nine years in Beavercreek City Schools.

In the middle of his teaching career, Bisig decided to try something different and moved to Honolulu. While in Hawaii he performed as a professional musician and managed two bicycle shops. 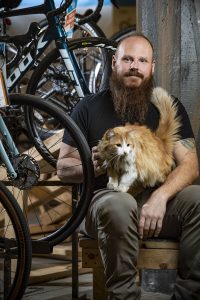 Mike Bisig still finds time to play music whenever he can.

“While I had certainly ridden bicycles when I was younger, Hawaii is where I really dove into the sport of cycling,” he said. “I really liked the people in the cycling community and I found my time on a bike to be a great thing for both my physical and mental wellness. It didn’t matter if I was keeping pace on a 30-mile road bike ride or bombing down a trail on my mountain bike, I was having a great time just being on a bike.”

When Bisig returned to Ohio, he became acutely aware that Ohio weather is sometimes not the best place for outdoor activities when it gets cold.

“I always thought it would be fun to have a place to ride my bikes inside when the weather is bad,” he said. “There are other indoor riding facilities in the Midwest, but I would have to drive several hours to reach one and so I thought that one day I would try to open my own indoor facility.”

In 2015-16, the stars aligned and Bisig began the process of opening Mike’s Bike Park.

Like other businesses, the COVID-19 pandemic has resulted in restrictions at the bike park designed to keep everyone safe. Social distancing is practiced, masks are required at all times (even when riding), and anyone who has COVID or has had symptoms within the previous two weeks is not admitted.

Even though Bisig is quite busy with his bicycle business, he still finds time to perform music whenever possible, making for an unusual combination of his talents.

“It has been an interesting journey to get where I am today,” he said.