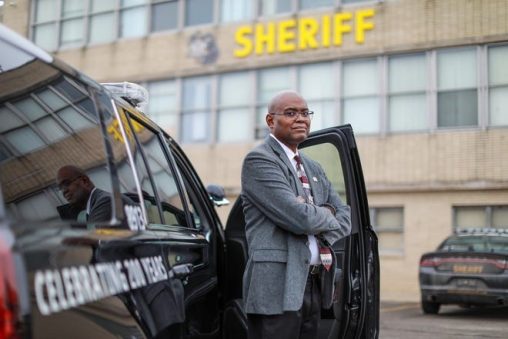 The Detroit police officer had suffered a head wound and was seeing neuropsychologist LaMaurice Gardner, a graduate of the Wright State University School of Professional Psychology.

“His medical retirement at 22 years old was devastating and depressing to him,” Gardner recalled. “In addressing his depression, he said, ‘Doc, you don’t understand. Only cops can understand cops.’”

“At some point in therapy she also said, ‘Doc, you don’t understand. Only cops can understand cops.’” Gardner said. “I then asked her, ‘If I am going to continue working with cops, I don’t want to take a third swing and miss. What should I do?’ She responded, ‘Be a cop.’ So I did.”

Gardner did indeed. For the past 26 years, he has worked part-time as a reserve deputy at the Oakland County Sheriff’s Office in the Detroit area.

Another reason Gardner became a police officer was to respond to mental health calls and help address and intervene with the mentally ill and people in emotional upheaval.

“I have observed how the closing of long-term psychiatric facilities here in Michigan and the truncating of inpatient psychiatric hospital stays have set up law enforcement personnel for life-and-death encounters with untreated, unmedicated individuals suffering from major mental illness,” he said.

Under the initiative spearheaded by Gardner, the Oakland County Sheriff’s Office requires mental health professionals to complete a reserve or part-time deputy police academy. These clinicians will have the same powers of law and arrest as full-time deputies while working alongside regular law enforcement personnel. Gardner has a handful of doctoral-level clinicians potentially involved in helping fill the ranks.

He said these clinicians will be able to do firsthand interventions using their de-escalation skills and techniques as well as provide expert witness testimony in court should an individual need to be committed.

“These clinicians would have the trust from their full-time officer partners, who know they would not have to babysit these trained cop/clinicians who can take care of themselves in a threat situation,” he said. 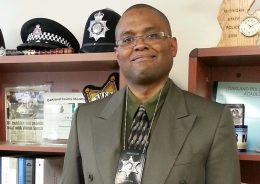 LaMaurice Gardner works part-time as a reserve deputy at the Sheriff’s Office in Oakland County, Michigan.

Gardner himself has de-escalated many volatile situations on the street or in homes and businesses by using active listening and problem-solving skills.

He has diverted subjects to health care facilities rather than jail. He has saved individuals from suicide or behaviors that may have led to suicide by cop. He once talked someone out of jumping off a bridge and another time convinced a subject to surrender after being barricaded in a car with an AK-47 assault rifle.

“The most gratifying thing to see is the person in emotional upheaval reach out his/her hand and say ‘Thank you’ and my law enforcement peers pat me on the back and say ‘Good job Doc,’” he said.

Gardner said the initiative should lead to police officer/clinicians being automatically dispatched to the scene of people in crisis.

“Better yet,” he said, “individuals in crisis could call the police dispatcher and request a mental health response team officer.”

Gardner has worked full time with the Veterans Administration as a clinical psychologist since 1994.

As a member of the International Association of Chiefs of Police, he has co-authored national policy and procedure and guidelines regarding police response to persons experiencing mental health crises. He has also written articles on managing encounters with returning military veterans and negotiating with depressed and suicidal barricaded subjects.

Gardner grew up in Detroit. His father was a clinical psychologist who taught at Wayne State University, consulted at local hospitals and maintained a clinical private practice. His mother was a school social worker with the Detroit Board of Education.

After graduating from Oak Park High School in 1979, Gardner earned his bachelor’s degree at Wayne State University and then came to Wright State’s School of Professional Psychology to pursue his doctorate.

“It was particularly appealing because it was an intense program focused on the practice of clinical psychology,” he said. “It offered exactly what I needed to become an exceptional psychologist. The amount of hands-on, face-to-face and group therapy as well as psychometric testing was a great advantage in preparing me for my future as a clinician.” 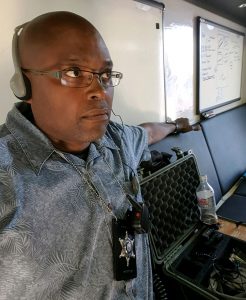 After graduating from SOPP in 1988, Gardner worked two years on an inpatient and adolescent psychiatric unit in Pontiac, Michigan, and then as a neuropsychologist at a traumatic-brain injury outpatient rehabilitation facility in Farmington Hills, Michigan.

In 1995, Gardner began working part-time for the Oakland County Sheriff’s Office as a reserve deputy. He has worked as a hostage/crisis negotiator for the SWAT team and as a police psychologist and reserve lieutenant has done hundreds of critical incident stress debriefings for officers and treated hundreds of them in his private practice.

“The badge has given me the credibility with officers I teach or those I see in group debriefings or individual psychotherapy for them to say, ‘You understand… You’re one of us,’” he said.