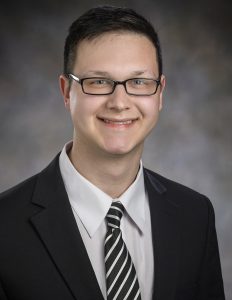 Finance and accountancy major Rob Noss turned an internship into a full-time job after he graduates in May.

An early interest in personal finance led Rob Noss to where he is today — poised to graduate from Wright State University with degrees in finance and accountancy and a job offer in his pocket from convenience-store giant Speedway LLC.

“I mainly just liked the idea of being able to understand how to set yourself up for success with a few money moves,” said Noss, whose interest in finance was sparked in high school.

Noss, who grew up in Beavercreek, arrived at Wright State long before he enrolled. His father, Bob, earned his master’s in education degree from Wright State and worked at the university for 27 years, many of them as sports information director. His mother earned her M.B.A. at Wright State and currently works at the Wright-Patt Credit Union.

When he was a boy, the younger Noss would often tag along with his father when he came to work, including when his father was working at Raider basketball games.

“I would be able to go shoot on the court after the games for an hour or so until he finished all the post-game work and went home,” Noss recalled. “And I was a ball boy for five or so years, which was always an amazing experience. Being around the program for so long as a child, I would look up to the players like they were gods, so rebounding shots for them during warmups was great.”

Noss’ favorite memory as a ball boy was when Wright State staged a thrilling rally in the final seconds to beat Butler 69–64 at the Wright State Nutter Center in 2011. Butler had been runner-up to Duke in the NCAA Tournament the previous year.

“That was an unparalleled rivalry, and Wright State was up late in the game so students were getting ready to storm the court,” Noss recalled. “As a 12-year-old ball boy, the likelihood of me getting trampled during the court storming was high, so security had me stand on the back of the hoop out of the way of the students. I’ll never forget that atmosphere and the view I had from the back of the hoop.”

Noss’ passion for finance was born during a personal finance class at Beavercreek High School.

“I think it is fun to learn how the management of money works and the importance of setting yourself up for the future,” he said. “I’m lucky to have gained the interest at such a young age.”

After graduating in 2017, Noss enrolled at Wright State to pursue a finance degree.

“I got into accounting after I found out I had a knack for it and was told it only took a few extra classes to get the accounting degree along with the finance one,” he said.

Noss is also pursuing a certificate in business analytics.

“I like the logic that is involved with data, and it’s always a fun puzzle,” he said. 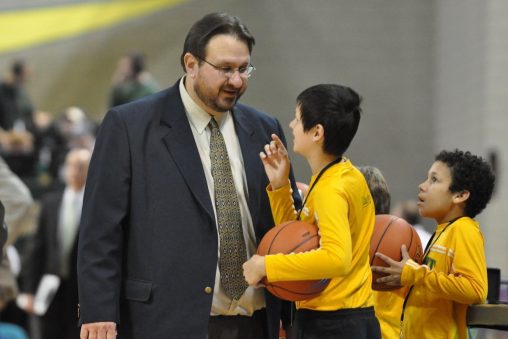 Daniel Asamoah, associate professor of management information systems, said Noss is a conscientious student and paid a great deal of attention to detail.

“He quickly developed the art and science of identifying trends and patterns in data, which is a valuable trait for business analytics,” said Asamoah.

Amir Zadeh, associate professor of management information systems, said Noss was an outstanding student in his class and had a genuine passion for learning new things and identifying new ways of solving problems.

“Rob has prepared and positioned himself at the interface of a number of business disciplines,” said Zadeh. “He has built the technical skills needed to succeed in a world centered around data.”

Noss has received multiple scholarships — a Raider Excellence scholarship, a Legacy Scholar scholarship from the Alumni Association and a scholarship for accounting from Brixey and Meyer and the Raj Soin College of Business.

He says the highlight of his Wright State experience has been the extracurriculars.

“During my first couple years I was not very involved and that made it difficult to really get the experience I wanted,” he said. “Once I started joining things like Finance Club, Beta Alpha Psi and the Dean’s Student Advisory Board I really started meeting a bunch of great people and making the connections I wanted.”

For the past two years, Noss has had a full-time internship in the accounting offices of Speedway and has received a job offer from the Enon-based company following his graduation.

“My internship has essentially been a catalyst for not only my career but also my personal development,” he said. “Speedway let me progress at my own pace, treating me like a regular employee rather than an intern in most cases.”

Noss’ duties at Speedway focus on helping with the management of separating accounting and financial information from Marathon Petroleum to prepare for Speedway’s sale to 7-Eleven.

“I love the problem-solving that is involved,” said Noss. “Each day is a new challenge, pushing the boundaries of my knowledge and teaching me new things.”

He plans to take the accounting job at Speedway following graduation and eventually return to school and earn a master’s degree and certifications in finance and accounting.

“I have the big goal of running a company one day,” he said. “The big dream would be to work with an NBA team’s financials and things like that.”