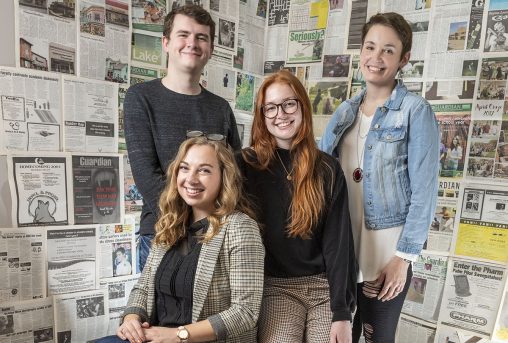 It’s Tuesday, November 3, 2020—Election Night. Campus is deserted, almost desolate. But the newsroom of Wright State’s student newspaper, The Guardian, is electric with activity—staffed with reporters, editors, and interns ready  to go.

“They just called Ohio for Trump. New York is going to Biden,” an intern yells across the room.

Each time a state is called, a staff member jots down a note and gets to work, furiously creating videos, posting to social media, or putting the finishing touches to an online story—all while wearing masks and staying six feet apart, of course.

The first newsroom team, led by editor-in-chief Makenzie Hoeferlin ’23, clocks in at 6 p.m. and works until midnight. A second team steps in at midnight and continues to write until 6 a.m. to cover additional updates.

“We stayed longer than planned because it was so fun. That was the first semester I felt like I was leading a team of reporters and editors,” Hoeferlin said. “It was a great moment.”

The 2020 election lasted well into the weekend, giving the young journalists time to prepare their coverage for the coming week during their weekly Friday planning meeting.

These meetings look a little bit different this school year. Rather than spit-balling in the newsroom in the Student Union basement, Friday meetings happen virtually, in lots of digital boxes via Zoom.

Hoeferlin spends her Friday mornings preparing to meet with her executive team, then plans articles and photo assignments with the staff. Typically, Hoeferlin will also devise a short writing lesson or a quick DIY, such as teaching the staff how to submit an open records request.

“You have to be knowledgeable in this position, but some people don’t think that leaders are also learning from others,” Hoeferlin said. “I enjoy the two-way street—I learn from reporters. I hope I also give them knowledge that will help them on their journey.”

Business manager Dylan Collison ’22 sells advertising and coordinates all digital efforts—a pivotal role at The Guardian, as ads create revenue. It’s been more challenging with everyone working digitally due to COVID-19, but it’s a challenge Collison was ready for.

“We have already encouraged everyone to be digital,” he said. “The good thing is, reporters have been able to learn new skills and foster more collaboration.” 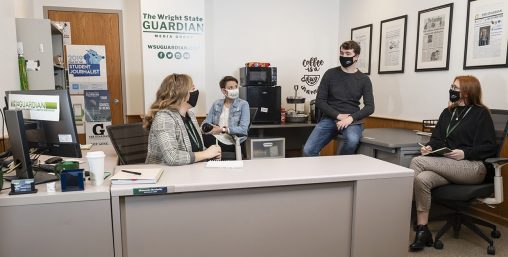 A switch to digital

In the fall of 2017, The Guardian followed the example of many student-run publications across the nation and ceased producing a print edition, going completely online. The shift was primarily due to budget issues. With the majority of the university population being commuters, the pick-up rate of the printed paper was low and the cost of printing too high. Thus, the creation of The Guardian Media Group, Wright State’s official student-led media source.

The staff had only the summer to prepare for the digital-only world.

“We had to rebrand ourselves as a comprehensive news organization,” Collison said. “Our goal is to be digital first and to use our resources as well as possible.”

Collison and the staff worked to meet this goal with former editor Sarah Cavender ’20. Collison and Cavender worked tirelessly, sometimes even using money from their own pockets, to make the transition as seamless as possible.

They faced countless hurdles, including an out-of-date website and an uphill battle to gain more pageviews and social media followers to create a larger readership.

“We had to be present at events, not just as reporters, but as students,” Cavender said. “We became more integrated with the student body.”

The pageviews jumped 250 percent and Cavender pushed the staff to embrace social media. All reporters created Twitter accounts and were publishing more interactive content that engaged both students and alumni.

“The number of things you can do creatively online is immense—we did galleries, created graphs, and other interactive content,” Cavender said. “You can tailor articles to have Facebook posts and tweets within them. It adds credibility when you can add so much to a story; it presents a different way of storytelling.”

The news organization’s new structure was put to the test in 2019, as was the city of Dayton itself. The area was hit by several tornadoes that utterly devastated the lives of its students over Memorial Day weekend. Then, that summer, a mass shooting in the Oregon District tragically killed nine people, including a current student.

Because the events took place during the Summer Semester, the full staff was not working. Cavender was on her own, something the young journalist remembers vividly.

“The day the tornadoes hit, I drove to campus to pick up a camera and [went] out to Beavercreek. Walking the line of devastation was surreal and the quietness of a normally busy road was deafening,” Cavender said. “A few months later, I walked the line of devastation in the Oregon District, but this time it was memorials and flowers placed in bullet holes in buildings and windows.”

When the staff returned in the fall, they had a lot of conversations about how to cover tragedies. The staff wrote stories about how students should approach mental health, and about important financial resources for students and employees.

“The team handled it very professionally and wrote profound stories on a community that was healing,” said Cavender. 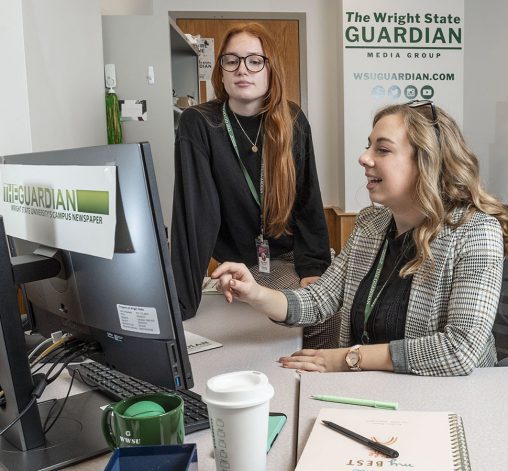 But by the time these tragedies occurred, the staff seemed like old veterans, after having already experienced perhaps their biggest test yet. In January 2019, two years of contentious negotiations between Wright State faculty and university administration resulted in a 20-day faculty strike. The event drew attention nationally as one of the longest faculty strikes in the history of U.S. higher education. The Guardian soon became a resource for news outlets all around the state and country.

The staff’s mission was to cover the event without opinion. The coverage of the strike is a point of pride for longtime staff advisor Debbie Lamp.

“I’m most proud how they stayed unbiased—they were professionals. It would be easy to choose a side on these issues as a student,” Lamp said.

The Guardian continued to write about the strike even when many faculty, staff, and students mentioned their distaste with what the news group was posting online. Cavender described there being a lot of tension on campus. But, she made sure her staff’s reports remained 100 percent accurate.

“It was an intense time on our campus. People were attacking our journalists and our validity. It was hard to define your role on the staff or as a student at times,” Cavender said.

Following the end of the strike, in fall 2019, the news group shifted focus and began to report on how the university was trying to heal and move on.

March 19, 2021, marked the 51st anniversary of The Guardian. The newspaper actually pre-dates the university, which in 1965 was still officially known as the Dayton Branch Campus of Miami University and Ohio State University.

The campus had just opened the previous fall and had received approval from the state to become its own public university, so campus was buzzing with excitement.

The first issue of The Guardian, published on March 19, 1965, featured articles about the new anticipated university. On the front page was an article titled, “Wright Bros. U. on bill,” a discussion of the naming of Wright State, and an article calling for an official student union to be formed.

Throughout its first years, The Guardian covered many historic moments, including coverage of the Vietnam War, student protests, reports on campus growth, the first May Daze, national tragedies, and Commencement ceremonies on the Quad.

When Dr. Jeff John became advisor for The Guardian in 1985, the paper printed four days a week and soon after became a weekly. John took a hands-off approach. The editors and reporters found stories and reported on what they wanted.

“Those days, when it became a weekly until the time I tried to retire, we had some great editors, great staff, and we put together some really good papers,” he said.

One article John reminisced about included a report about President Kim Goldenberg being absent from campus. The staff wrote a story called “Where’s Kim?,” a parody of “Where’s Waldo?” Afterward, Goldenberg appeared to be present on campus more often.

“Being the faculty mentor for The Guardian was most satisfying when it was good and most stressful when it was bad. It’s like a basketball team. You have four years of great players and then they graduate and you start over,” John said.

The stressful times came when staff reported on more difficult topics, including a faculty member accused of indecency and a basketball player’s arrest following an altercation with a girlfriend.

Not shying away from topics, no matter how controversial, is something the staff is still proud of to this day. And it’s beginning to pay off again. 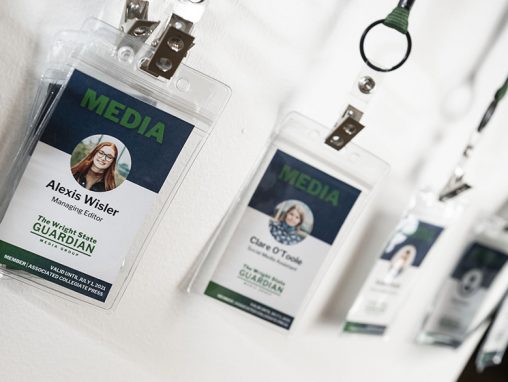 “I remember walking into the office and seeing all the awards that were on the wall. But we hadn’t won anything since the early 2000s. I thought, ‘What can we do to be that again?’” Cavender said.

And then it happened.

In 2019, five members of The Guardian were recognized by the Ohio News Media Association with second place in news coverage and third place in photography.

In 2020, The Guardian was also honored as a Society of Professional Journalists (SPJ) Regional Mark of Excellence finalist for online in-depth reporting. And finally, the SPJ awarded The Guardian with second place in news and features reporting, and the big one, first place for best daily college newspaper—an award bestowed to the best student publication in the state.

“I was Sarah’s first call. She said we won. It was crazy. It’s rewarding to know what we do matters and the Miami Valley and Ohio have recognized us,” Collison said.

Awards are something Hoeferlin wants to continue accumulating.

“It was so surreal and intimidating, but I want to continue that into the next few years,” Hoeferlin said.

As for whatever the rest of 2021 has to throw at the young journalists, they will be ready.

For more information and to read articles from The Guardian, visit wsuguardian.com.