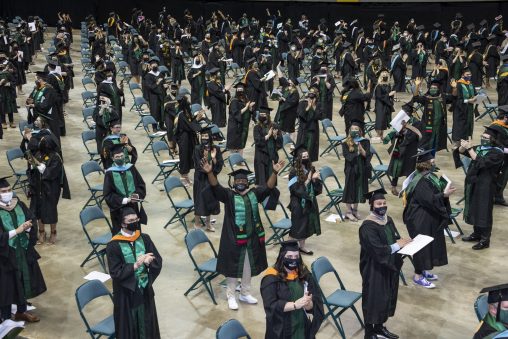 Members of the class of 2021 celebrated graduation during four spring commencement ceremonies on April 30 and May 1 in the Wright State Nutter Center. (Photos by Erin Pence and Chris Snyder)

Wright State University honored nearly 1,900 graduating students over the course of four spring commencement ceremonies on April 30 and May 1 in the Wright State Nutter Center.

The university held four separate ceremonies at the Wright State Nutter Center to accommodate COVID-19 safety protocols. The Lake Campus also hosted three in-person ceremonies. They were the first in-person commencement ceremonies held by Wright State in over 16 months due to the COVID-19 pandemic.

Graduating students ranged in age from 18 to 65. The class also included 90 international students from 19 different nations.

In her commencement address, Wright State President Sue Edwards told graduating students not to look back but instead to set their sights on the future.

“Spend most of your time driving toward your next adventure. Visualize where you are going,” she said. “Realize your dreams. And show the world what Wright State Raiders are truly made of. I am so proud of your strength and perseverance.”

The ceremonies also included video messages from Gov. Mike DeWine and Mary Boosalis, president and CEO of Premier Health, each of whom praised graduates for their resilience and fortitude in achieving their dreams during extraordinary times.