Ohio to reckon with the raucous presence of 17-year cicadas 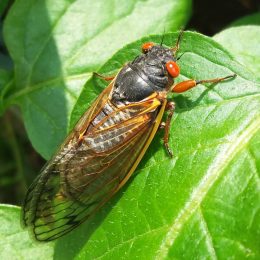 They will be hard to miss. They have red eyes, and the roar of their buzzing chorus can drown out most of whatever you’re trying to listen to.

Say hello to Brood X, an invading army of cicadas that emerge from their underground slumber once every 17 years to mate and lay eggs. They have a date with Ohioans for four weeks in May and June.

Broods are large populations that emerge at the same time and are generally labeled with Roman numerals. Brood X, which last emerged in 2004, is one of the larger broods and will also make appearances in parts of Pennsylvania, Michigan, Virginia, North Carolina and elsewhere along the East Coast.

These frisky and vocal insects are black with red eyes, stylishly different from the yellow-eyed green cicadas that emerge every year in late summer.

Don Cipollini, professor of biological sciences at Wright State University, calls Brood X a wild spectacle of nature. He says their mating call can be deafening. The buzzing and clicking cicada noise can reach 90 decibels, as loud as a lawnmower, dirt bike or tractor, according to the U.S. Department of Health and Human Services.

Cipollini said the reason there are so many cicadas is that it enables them to survive predators that find them to be easy pickings because they are weak fliers. Even if millions of the billions of cicadas get eaten, there are still plenty left to mate and lay eggs.

The emerging cicadas began their journey in 2004, when they dropped from tree branches as nymphs and burrowed in the soil. Cipollini said they then spent 17 years attached to tree roots feeding on xylem fluids with their piercing and sucking mouthparts. They periodically move around underground and can burrow down to about eight feet.

How the cicadas keep track of time is somewhat of a mystery. Cipollini said it likely involves sensing and “counting” seasonal pulses in plant resources as their host plants go through their annual growth cycles. Sensing seasonal temperature fluctuations may also play a part.

When the cicadas’ internal clock strikes 17 years, Cipollini said, they move upward in the soil and build an exit tunnel at the surface in preparation for emergence when soil temperatures reach 64 degrees. He said this usually occurs in mid-May in the Dayton area, especially after a soil-softening rain.

Upon emergence from the soil, cicadas will climb on the nearest upright object, shed their skin and emerge as winged adults, Cipollini said. It can take a few days, he said, for their exoskeleton to fully harden and for them to be functional as adults in terms of flying, singing and mating.

Once above ground, the cicadas’ whole reason for existence is to reproduce as much as possible before they get eaten or die. They mate continuously and with many partners.

Cipollini said the males do all the singing, using a special organ called a tymbal located behind the wings on the abdomen. Mating calls can be so loud that male cicadas will disable their own eardrums to protect themselves from the noise. In response to male mating calls, females respond with wing flicks to indicate their interest.

Once mated, females begin the egg-laying process, which involves cutting slits in pencil-sized tree branches with a saw-like ovipositor and inserting 10 to 20 eggs at a time. A single female will lay up to 200 eggs during her lifetime and will die after she has deposited all her eggs.

Cipollini said cicadas lay eggs on a wide variety of woody tree and shrub species, but they seem to have a preference for oak trees and avoid most conifers. Egg-layer damage can injure small or weak trees but have little long-term impact on large trees.

Cipollini said newly planted or small trees can be protected by placing one-centimeter mesh netting over them between mid-May and mid-June. New tree plantings can be delayed until autumn to avoid damage.

The eggs hatch in six to 10 weeks and the first nymphs that emerge will fall to the ground to start the process all over again.

The cicadas serve as a source of food for birds and small mammals, who often experience population increases for a few years because of it. Cicada carcasses also serve as fertilizer for the trees on which the nymphs feed.

Cipollini doesn’t recommend using pesticides to fight the cicadas because they are harmless and don’t stay around for long. And when they leave, they don’t come calling again for 17 years — in 2038.