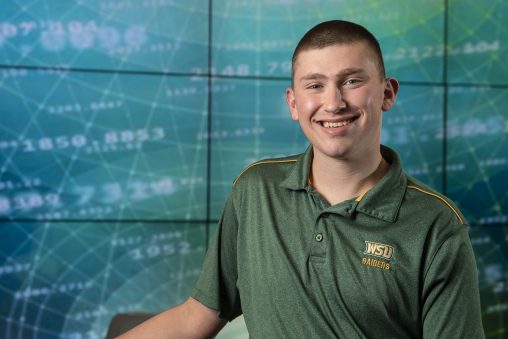 Jared Smith, who graduated on May 1 with a bachelor’s degree in management information systems and data analytics, developed an Enterprise Systems Planning system for a high school band program for his honors research project.

He’s a fixer, a giver and has a magic touch with computers.

Jared Smith, a 2021 Wright State University business graduate, has solved computer network problems, helped companies update web pages, provided the elderly with tech assistance, and most recently developed a system for a high school band program that will enable it to save money and improve productivity.

Smith also works for the U.S. Air Force following an internship, doing IT work for the Air Force Life Cycle Management Center, and recently received the 2020 Annual Excellence Award in the Plans and Programs/Cyber and Analysis Directorate.

He had a 3.872 grade point average and graduated on May 1 with a bachelor’s degree in management information systems and data analytics.

“During my time at Wright State University, I have not seen a student like him so brilliant, engaged and passionate about what he is doing,” said Amir Zadeh, associate professor of management information systems.

Smith grew up in the Springfield area. Both of his parents have business backgrounds. His father owns and operates Hershey Ice Cream – Springfield and Smith’s Market. His mother is the managing director for the Fairborn office of CBIZ and is a certified public accountant and certified fraud examiner.

Smith became interested in IT and computers in middle school, where he worked with the IT staff member to perform many of the day-to-day activities such as tech support and account creation tasks.

After graduating from Kenton Ridge High School in 2017, Smith was attracted to Wright State by the large number of resources offered and the faculty’s willingness to help him even before he started college. At a Raider Open House, he met Kevin Duffy, an associate professor of management information systems, who both inspired Smith and mentored him over his four-year Wright State career.

“The highlight of my time at Wright State has been all of the relationships and opportunities I have been given that I would never receive at other schools,” said Smith, who served on the Dean’s Student Advisory Board of the Raj Soin College of Business.

He has logged more than 2,000 community service hours, helping the elderly with technology, providing technical assistance at Kenton Ridge High and managing the social media presence of several companies.

He has fixed computer network problems, created new themes for company web pages and installed a device that enabled an Apple TV to be viewed on two different projection screens at the same time. He has also used the Configurator computer program to find more efficient ways to produce the same amount of management to devices without having to manually touch each one.

“There were techniques and technologies with which he was unfamiliar. He studied them meticulously and applied them to his project,” said Zadeh. “He attacked each new task as an opportunity to learn and in the process became very interested in tools, techniques and platforms in use.”

System development is a process used in information systems and software engineering for planning, creating, testing, and deploying an information system. The system was developed using computing resources available at Data Analytics and Visualization Environment, or DAVE lab, in the College of Business. The lab features a mini supercomputer and enterprise software and is used to teach students enterprise systems and analytics.

“Jared felt this project would not only provide the local band organization with a resource that would deliver a great deal of the needed management reports, but also provide him with real-world experience in database development and management,” said Zadeh.

The system Smith developed for the band program enables users to make payments and provides tools for mass emailing, producing reports and managing money. For the project, he leveraged $3,500 in Microsoft Azure credits as part of a grant from Microsoft’s community program to access the company’s Power BI analytics software.

Smith said the biggest challenge of the project were the different types of coding languages he had to learn.

“By providing real-world examples of the concepts we learned in class, I was able to gain a deeper understanding of the concepts and how they would be used in the real world,” he said.

Zadeh said the project will enable the band to save money, improve productivity and provide a better music experience for its 130-plus members.

“This tool could be expanded and used by any educational organization, as many of the features that have been developed are universal to any group attempting to produce updated management reports,” said Zadeh, who nominated the project for an award of excellence.