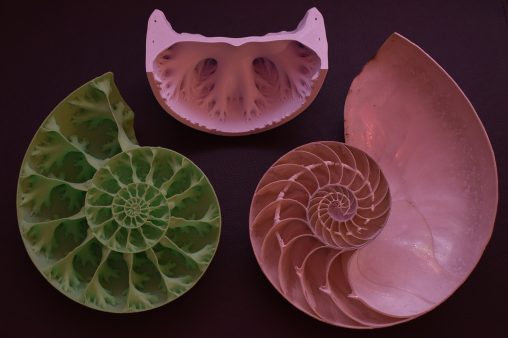 New research by Wright State University Lake Campus faculty member Chuck Ciampaglio, Ph.D., and alumnus David Peterman into relatives of the squid that went extinct with the dinosaurs has been published by the prestigious journal Scientific Reports – Nature.

The research sheds new light on ammonites, externally shelled relatives of the squid that went extinct nearly 66 million years ago.

“We managed to bring these creatures back to life,” said Ciampaglio, a professor of Earth and environmental science. “We 3-D printed them with the correct mass, gave them propulsion, put them in tanks, and we could see how they moved.”

Titled “Buoyancy control in ammonoid cephalopods refined by complex internal shell architecture,” the research paper explains how the evolution of the animals’ shells made them more maneuverable in the water.

“What’s really cool is it attempts to answer a question by actually looking at the biomechanics and testing an hypothesis,” said Ciampaglio. “A lot of times people come up with ideas and argue about them without testing the hypotheses.”

Scientific Reports is an online, multidisciplinary, open-access journal from the publishers of Nature that publishes original research from the natural and clinical sciences. It is the seventh most-cited journal in the world, with more than 350,000 citations in 2019, and receives widespread attention in policy documents and the media.

The paper co-authored by Ciampaglio and Peterman was accessed 2,358 times in one week alone. 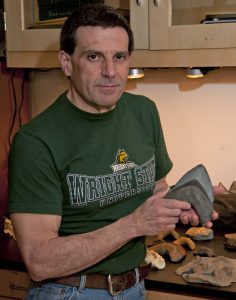 Chuck Ciampaglio is a professor of Earth and environmental science at the Lake Campus.

Peterman earned his bachelor’s degree in earth and environmental sciences and his master’s in geophysics at Wright State before beginning the study of paleobiology in pursuit of his Ph.D., which he earned this year. His dissertation was on the three most common shapes of ammonoids in the U.S. western interior and the physics that acted on them while they were living. He is currently a National Science Foundation postdoctoral fellow at the University of Utah.

Peterman was one of Ciampaglio’s graduate students while at Wright State. The two of them published four papers in the past year.

Their new paper on ammonites is based on the fact that over time the sutures between the chambers of the ammonite shells became very contorted, with flowerlike curves and swirls.

“Everybody has been trying to understand for the last 100 years why that happened,” said Ciampaglio. “Many scientists thought it made the shell stronger but that proved not to be the case.”

He and Peterman created three-dimensional computer models of the ammonite shells and their internal dividing walls and then printed them out.

“What we showed was the crazier those sutures became, the more liquid the chambers could hold,” said Ciampaglio. “The way they would move up and down the water column was to pump water into their shell, become heavier and sink. Then they would get rid of the water and rise.”

All that complexity, he said, created a capillary effect in which the ammonite could hold more liquid, making it easier to move up and down.

“Nobody had thought of that,” said Ciampaglio. “It’s going to rewrite the books.”