It cast a spell on her when she was just a child. During her many visits there, Anna Helmig was dazzled by the Boonshoft Museum of Discovery.

Today she visits the Dayton museum every workday. The two-time Wright State University alumna is the museum’s collections manager and registrar, a gig she calls her dream job. She oversees the care of 1.8 million natural history collections objects and manages all of the data associated with them.

“I grew up visiting the Boonshoft so I know firsthand how magical the museum can be to a child,” said Helmig, who earned her bachelor’s degree in religion and history and a master’s degree in public history at Wright State. “Even though I work here and am grown now, I still like to walk around and appreciate our amazing artifacts, exhibits and adorable zoo animals.”

The museum’s Discovery Zoo teems with live animals, including Ruby, a red-tailed boa. Science on a Sphere is a 68-inch-diameter, carbon fiber globe suspended in mid-air that takes visitors on a tour of Earth and space and makes hard-to-grasp data and complex information easier to understand.

Explorers Crossing helps children to discover shapes, colors and numbers, and see what it’s like to be a veterinarian, tune up a car, prepare a pizza and learn the importance of recycling. A treehouse teaches environmental preservation and offers bird watching and images of flying squirrels captured on night-vision cameras. 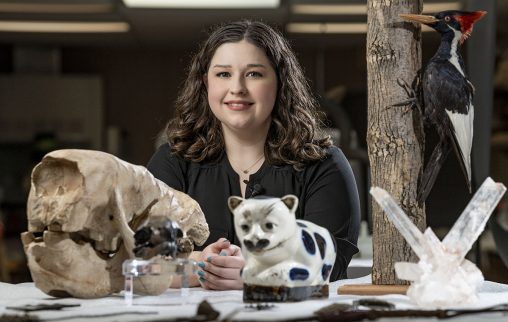 Anna Helmig, a two-time Wright State University graduate, oversees the care of 1.8 million artifacts at the Boonshoft Museum of Discovery.

“I am responsible for ensuring all of these objects are safe and preserved for years to come as well as tracking and compiling information on the objects in our collections database,” she said.

Helmig said the best part of her job is that she learns something new every day.

“With over 1.8 million artifacts in our care, I definitely am not an expert on every single object within the collection,” she said. “I consider this a positive thing, as it means I have the opportunity to learn more about a diverse range of topics from how to best store Ordovician trilobites to how to clean and style a taxidermy Blesbok mount.”

Helmig grew up in Xenia, graduating from Xenia High School in 2014. She had visited Wright State during her junior year, meeting with history students and faculty members.

“They were so welcoming and interested in my studies and happy to talk to me about all of the opportunities to be had in the history and public history programs,” she said. “I felt right at home and I knew I belonged at Wright State.”

Helmig said that after taking a few religion and history classes her first semester, she knew she wanted to work in humanities. She said Wright State helped prepare her to succeed in the museum field and that her professors in the College of Liberal Arts made a huge difference in her education and life.

“They encouraged me to pursue work in the humanities sector despite my worries I wouldn’t be ‘good’ enough to land a job in my dream field,” she said. “My professors not only instilled critical skills and knowledge in me but also helped me gain the confidence I needed to succeed as a public history professional.”

Helmig said the highlight of her time at Wright State was being in the public history graduate program. 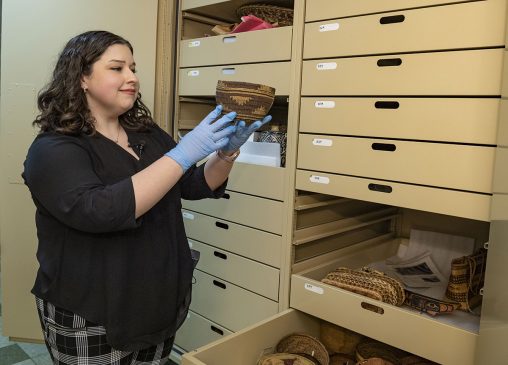 Anna Helmig is responsible for ensuring the museum’s objects are preserved and for compiling information on the objects in the collections database.

“My cohort and I toured many Dayton-area museums and archives and connected with some inspiring local public historians,” she said. “I also got the opportunity to intern and work with priceless historical materials at some amazing places like the Cincinnati Museum Center and Wright State University Libraries’ Special Collections and Archives.”

Helmig began interning at the Boonshoft Museum of Discovery in 2019 while working on her master’s degree. She was hired as a collections technician and then promoted to collections manager and registrar, all prior to receiving her degree in 2020.

“Though it has been nearly a year since I graduated from the public history program,” she said, “I am continuing to expand upon the museum skills I gained from the program in my current role at the Dayton Society of Natural History.”

“I definitely think the museum instills in its visitors, both young and old, a sense of respect and wonder for both the natural world and world cultures through our incredible collection as well as our exhibits, zoo and planetarium,” she said. 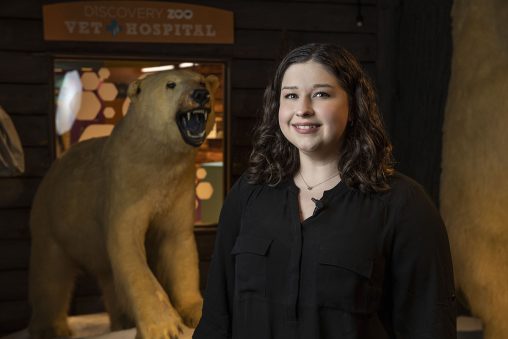 Anna Helmig said the College of Liberal Arts helped prepare her for a successful career in the museum field.