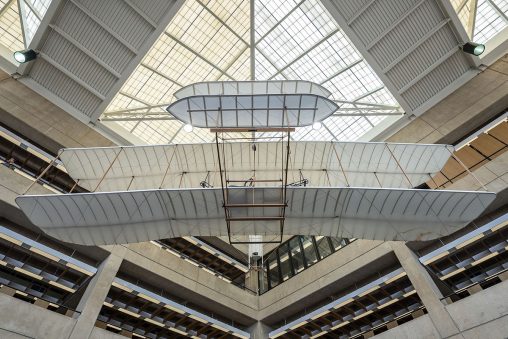 Dunbar Library was recognized by Ohio.org for the replica 1903 Wright Flyer that hangs in the atrium.

Wright State University’s Dunbar Library has been named the Ohio college library with the most unique feature thanks to the replica 1903 Wright Flyer that hangs from the ceiling in the atrium.

In an online article titled “Best College Libraries in Ohio,” Ohio.org, the official website of the State of Ohio, included Dunbar Library on its list of five college libraries that stand out from the rest.

“What would Wright State University, named after the aviation pioneering brothers who called Dayton home, be without at least one airplane on campus?” the article says. “On the chance you get to look up while studying in the Paul Laurence Dunbar Library, you’ll see a full-scale replica of the 1903 Wright Flyer aircraft right above you in the skylit atrium.”

Wright State is named in honor of Wilbur and Orville Wright. Wright State University Libraries’ Special Collections and Archives houses the largest collection of Wright brothers’ materials in the world.

The biplane, which is suspended 16 feet in the air, is a replica of the first machine to achieve controlled powered flight. It has a wingspan of more than 40 feet, is 21 feet long from the nose to the tip of the tail and weighs almost 500 pounds.

“Our biplane is very special and unique and a fitting tribute to this university and the Wright brothers,” said Sue Polanka, university librarian. “We are thrilled to be featured amongst the best college libraries in Ohio.”

The flyer was built by a group of volunteers of skilled woodworkers, machinists and seamstresses led by Howard DuFour, an engineer and master machinist who worked in the Instrument Shop in the College of Engineering and Computer Science.

DuFour spent over a decade making the dream of building the flyer a reality, and it took nearly two years and thousands of hours to construct the plane.

Since no original drawings of the plane existed, DuFour used finished dimensions from the National Air and Space Museum, which had measured the actual 1903 Wright Flyer displayed in its collection. DuFour and his team matched the materials and methods used by the Wright brothers as closely as possible. 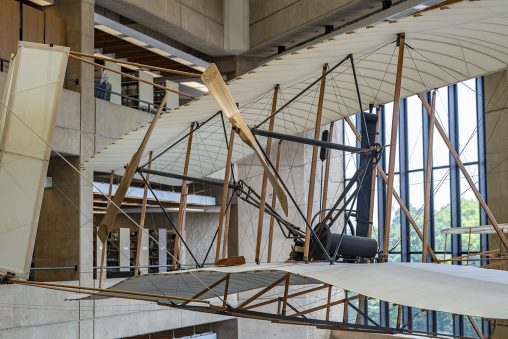 The replica Wright Flyer was built by a group of volunteers of skilled woodworkers, machinists and seamstresses led by Howard DuFour, an engineer and master machinist who worked in the Instrument Shop in the College of Engineering and Computer Science.

Ohio.org offers an annual Ohio travel guide and spotlights attractions, events, festivals and lodging around the state. It also features information about state agencies and offers help finding jobs and starting up businesses.