Wright State University education alumnus J.R. Geraci has this bit of advice for students — follow the opportunity wherever it takes you.

Geraci, who graduated with a bachelor’s degree in education in 1987, said he not only learned how to be a good teacher at Wright State but also mastered study, research and people skills.

“You are always going to benefit from the education you get at Wright State University,” he said. “You gain so much knowledge and confidence that when you get out — and it happens to more people than you would know — they don’t use their major directly. They go in a different direction. But that major allowed them to learn life skills that make them successful as they move forward.”

Geraci was a walk-on for the swim team at Wright State. It’s hard to miss his name and image in the Wright State Natatorium. He is splashed all over the walls on banners and plaques.

A 2003 inductee into the Wright State Swimming and Diving Wall of Fame, he earned four All-American honors during his career and holds the three-meter, 11 dive school record with a score of 566.00.

“Going to Wright State was a wonderful experience. It gave me the book knowledge of what I needed,” he said. “But the springboard diving gave me a lot of confidence in myself and the ability to tackle problems as they happened.” 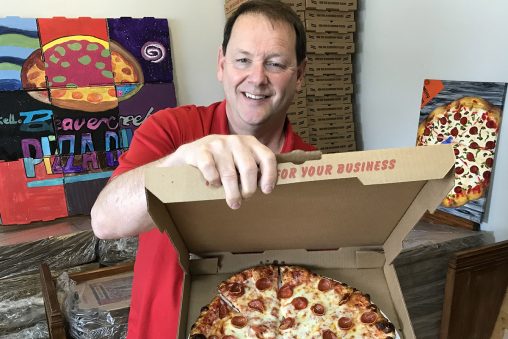 Wright State education alumnus J.R. Geraci dived into college, into the water on the swim team and into business as the owner of the Beavercreek Pizza Dive. (Video by Kris Sproles)

“My dad was a teacher so I thought that was a good calling for me as well,” he said. “…I was very prepared. At Wright State, we had both urban and suburban experience.”

While he was teaching, Geraci returned to Wright State as the diving coach and to teach in the Health and Physical Recreation Department, duties he performed for three years. Twenty years later, he would return to coach diving for another three years.

“I had very good success with the divers as a coach,” he said.

After teaching in Fairborn for a year, Geraci had an opportunity to sell, rent and service golf carts in Cincinnati. When the owners retired, he bought the business and began managing it, at the age of 27.

After many years of doing that, Geraci made another career swerve.

“My wife was in marketing and I decided I wanted to do something we could work on together,” he said. “The store became available and I said, ‘Let’s do pizza.’”

So the Beavercreek Pizza Dive was born 14 years ago, the name inspired by Geraci’s days of springboard diving. The restaurant makes and sells New York-style pizza, pretzels and oven-baked sandwiches. 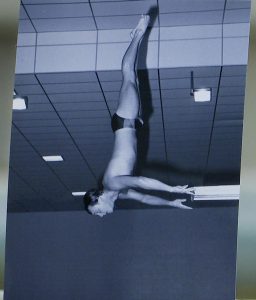 J.R. Geraci was inducted into the Wright State Swimming and Diving Wall of Fame in 2003.

“Everything is homemade — our own bread, our own dough, our own sauce. We cut our slices real big so you can fold them like a New Yorker,” he said. “…After you come here, you’re going to wonder why you never came before. I hear it all the time.”

To keep staff and customers safe during the COVID-19 pandemic, Geraci turned the 43-seat lobby into a production area and currently only offers home delivery or delivery to customers in the parking lot.

Over the years, Geraci has employed many Wright State students at the Beavercreek Pizza Dive and offers scholarship money to student employees with good grades.

“Having Wright State in our backyard feeds us with high-quality individuals that can help us run our business,” he said. “We like to hire people that have goals and a future. We find that they are very productive team members.”