The 10 Wright State University students are fanned out on a grassy bluff that overlooks a historic battlefield. They are digging for traces of a Native American fort torched by American forces in 1780.

The excavation is unfolding at George Rogers Clark Park near the Mad River just northeast of Wright State. It’s all part of the Field School in Archaeology offered in an anthropology course in the College of Liberal Arts.

This year’s class includes 10 undergraduate anthropology students, one of whom serves as a student supervisor.

“This site is probably the location of the fort,” said Lance Greene, Ph.D., associate professor of anthropology. “The Shawnee built this three-sided, palisaded fort to defend against the Americans, and the Americans burned it to the ground. So we’re looking for evidence.”

Piqua, also known as Peckuwe or Picawey, was a Shawnee village of about 2,000 established in the mid-1700s near where the students are digging. The village and British-style stockade were attacked by a Kentucky militia of 1,100 led by George Rogers Clark on Aug. 8, 1780.

The militia reported killing about 40 Shawnee, burning all of the houses to the ground and destroying 800 acres of corn. The heart of the battlefield is a grassy, 30-acre meadow. 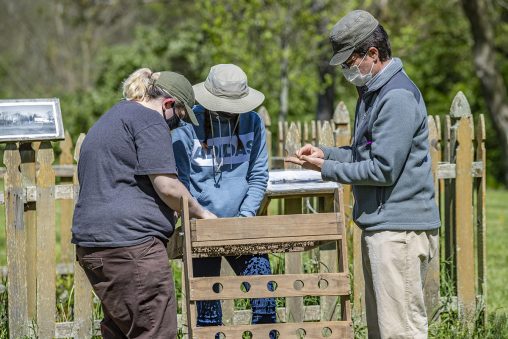 Lance Greene, associate professor of anthropology, right, and undergraduate anthropology students in Field School in Archaeology are searching for evidence of a Shawnee fort at George Rogers Clark Park. (Video by Kris Sproles)

Tiny orange and yellow pennants mark the perimeter of this year’s excavation site, which is being probed by digging small holes to look for artifact clusters. The students shovel dirt into plastic buckets and pour the contents into wood-framed sifters, which reveal any artifacts and fragments as the soil is hand-shaken through the screen.

If a promising artifact is found in this exploratory process, the digging expands. Artifacts are bagged and tagged with location numbers before being returned to the lab for analysis.

Greene created the Field School in Archaeology to investigate the archaeology and history of Shawnee settlements in Ohio. The school is in its fourth year after missing last year’s session due to the COVID-19 pandemic.

“It’s wonderful to be back here. It’s been two years since we did the Field School,” said Greene. “The shutdown with COVID has been really difficult. So both with being outside and working with students face to face has been fantastic.”

The students have discovered musket balls, gunflints and everyday artifacts like pieces of cast iron pots, ceramics, glassware and nails.

Julie Roseberry, of Greenville, said she was initially interested in mortuary science but decide to pursue anthropology instead.

“That way I still get to work with death, but I change the narrative from me and modern people to those who can no longer tell their story,” she said. “I would rather work with the dead to help the living better understand them.” 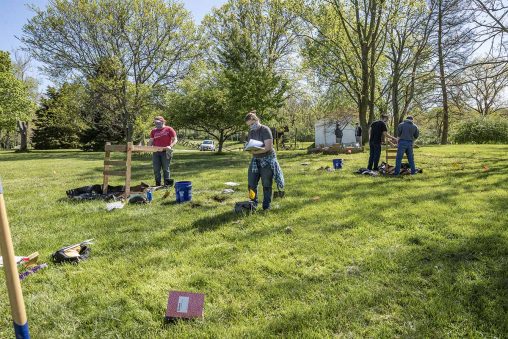