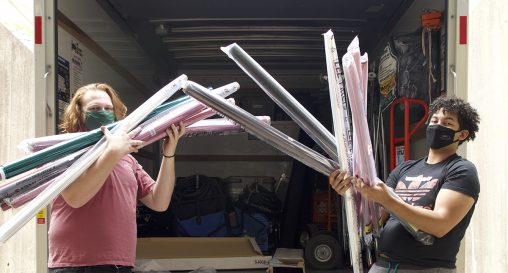 Three Wright State University student filmmakers have won highly competitive cinematography grants that will help in the production of their thesis films.

The LEE Filters product grants, totaling $2,600, were awarded to Christopher Bollinger of Dayton, Joseph “Harris” Norton of Bellbrook and Marvin Watts of Cleveland. The seniors are cinematography specialists in the Motion Pictures Program in the College of Liberal Arts.

The LEE Filters Education Assistance Program (LEAP) offers the grants to student filmmakers, focusing on schools that offer the most demanding and comprehensive curriculums in lighting and cinematography.

Only six LEE Filters product grants are awarded nationwide each month. They often go to students at larger universities like the University of Southern California, New York University and the American Film Institute.

“The LEAP product grants will give the cinematographers much more control over their lighting environments, from correcting tint in fluorescent settings to achieving the desired color of light, allowing them to be more effective in telling their story visually,” said Jeremy Bolden, instructor of motion picture production at Wright State.

LEE Filters is a manufacturer of color filters and color gels for the entertainment lighting, film and photography industries.