The purple pantry on a post sits next to a busy street near downtown Dayton. Inside are cereal, saltines, pasta sauce and cream of chicken soup.

“Take food if you need it,” a sign on the pantry reads. To some people, it’s the difference between eating or not.

The pantries on a post are part of a community service project by a group of Wright State University graduate students in partnership with Good Neighbor House. The team of seven Master of Business Administration students arranged the installation of five pantries in and around Dayton.

“It’s been fantastic,” said Tim McClain, an MBA student from Lewisburg. “A ton of people will leave notes, just saying how grateful they are and how appreciative they are having these things in the area. They just pick up a box of spaghetti or something and they’ve got food for the night. It’s been really good in the areas they’ve been installed in.”

The food pantries are part of a national movement called “Give What You Can, and Take What You Need.”

“Anyone can come up to these and put food in it or take food out,” McClain said.

Good Neighbor House keeps the pantries stocked. McClain said that while there is no limit on how much food one person can take, there haven’t been any reported issues of people taking too much food.

The project was part of a capstone class taught by Jesse Maleszewski, instructor of management. The other students on the team were Mouhamad Daaboul, Lillian Ebiem, Bryce Haney, Tyler Liddy, Michael Osborne and Phil Simpson. 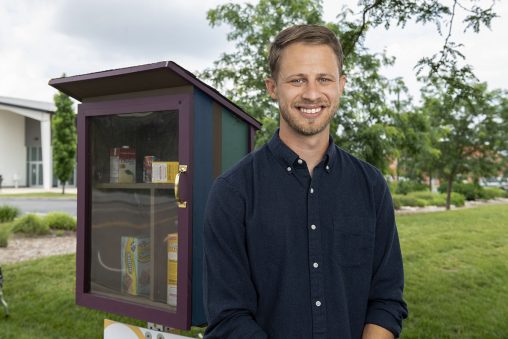 McClain is pursuing on an MBA with a concentration in project management and works as a software engineer at Ball Aerospace.

He said the team had made calls around Dayton looking for a project and were referred to Good Neighbor House, a nonprofit that provides food pantry services, clothing and household items to underserved individuals and families.

Good Neighbor House had already installed two pantries and had built five more. The students contacted the office of the mayor and Dayton City Council to identify good areas for the pantries, identified locations and arranged for the installations in April.

The pantries are located next to Good Neighbor House, outside a church near the University of Dayton, downtown next to St. John’s United Church of Christ and outside churches in Riverside and Fairborn.

“Everything I’ve learned over the past few years basically I got to put into this project to show what I can do and prove to myself I can do it,” said McClain.

The students created a business plan and then wrote up a contract that had to be approved by Good Neighbor House. They then created a schedule, identified pantry locations, arranged installations and executed the plan.

“The Wright State MBA Program has been really beneficial to me,” said McClain. “Coming from a computer science background, I wanted to do this so I could learn a lot more about the business side of things so I could progress in my career. And that is absolutely what Wright State has prepared me to do.”