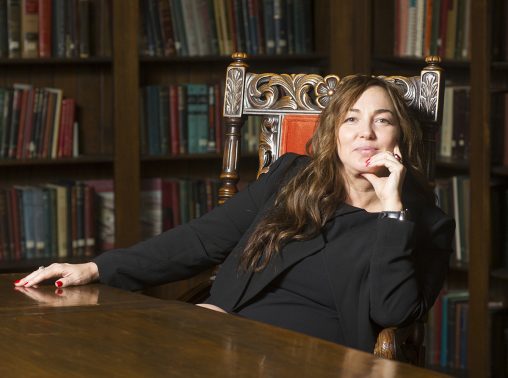 Terry Oroszi, a faculty member in the Boonshoft School of Medicine, has joined the FBI InfraGard National Members Board of Directors.

Boonshoft School of Medicine faculty member Terry Oroszi, Ed.D., has been named secretary of the FBI InfraGard National Members Board of Directors. Previously, Oroszi had served as the InfraGard Dayton Chapter president.

“I am excited to be working together with the FBI and this talented group of national leaders, whose first mission is to safeguard our country,” said Oroszi.

Oroszi is associate professor, director of graduate programs in the Department of Pharmacology and Toxicology, and director of the Chemical, Biological, Radiological and Nuclear (CBRN) Defense Certificate Program at the Wright State University Boonshoft School of Medicine.

She is the author of several books including 2019’s “The American Terrorist: Everything You Need to Know to be a Subject Matter Expert,” which she co-authored with David Ellis, a behavior researcher and adjunct faculty in pharmacology and toxicology in the Boonshoft School of Medicine.

InfraGard is a partnership between the FBI and members of the private and public sectors. It is designed to expedite the timely exchange of information and provide mutual learning opportunities in the protection of critical infrastructure. Members include academics, computer professionals, law enforcement, business executives, and military and government officials, all working to advance national security. There are approximately 75,000 members and more than 80 local InfraGard Member chapters, represented nationally by the InfraGard National Members Alliance.

“They are an organization that values education and sees it as one of the ways we collectively keep our country safe. This is exactly the kind of organization in which I want to be a part of,” said Oroszi.

InfraGard’s goal is to promote ongoing dialogue and timely communication between members and the FBI. As a result, InfraGard members gain access to information, enabling them to protect their assets and, in turn, give information to the government in order to prevent and address terrorism, cyberthreats and other crimes.

Oroszi’s work with InfraGard began in 2017 when a colleague with the Dayton Think Tank suggested she reach out to the organization because of her research in crisis decision-making and terrorism. Later that year, she spoke at InfraGard’s national conference, became a board member and was appointed the Dayton Chapter president in 2020.

One of her missions as an InfraGard local leader was to fill the membership gaps among the 16 InfraGard-identified critical infrastructure sectors whose assets, systems and networks are considered so vital to the United States that their incapacitation or destruction would have a debilitating effect on security, national economic security, national public health or safety.

“Membership is not equally dispersed amongst the 16 sectors. As chapter president, I made it my mission to work with the board and the FBI public sector coordinator to fill those gaps at a local level so that Dayton would be prepared,” said Oroszi.

In 2020, Wright State was honored for its strong partnership work with the FBI and received a 2020 InfraGard Regional Award in the category of Public/Private Partnership.