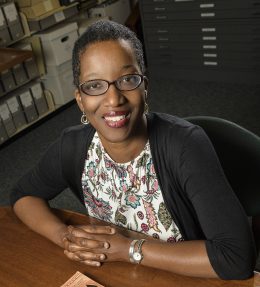 Sharon Lynette Jones, professor of English language and literatures, visited archives around the country to research “Conversations with Angela Davis.”

A book about prominent civil rights activist Angela Davis, compiled and edited by Sharon Lynette Jones, Ph.D., professor of English language and literatures at Wright State University, is in print.

“Conversations with Angela Davis” was published recently by the University Press of Mississippi.

Jones is the editor and responsible for the Introduction, Chronology and other information. Jones says the book is timely.

“I want people to be aware of the ways that the ideas expressed in the interviews are applicable and pertinent to ongoing situations while also acknowledging how the interviews are historically noteworthy,” she said. “In addition, I want ‘Conversations with Angela Davis’ to add to and expand the existing scholarship about Angela Davis, especially given how she has influenced discourse about civil rights.”

The book project took extensive research and involved visits to archives around the country. Jones traveled to Atlanta to comb through the archives of Emory University. She also visited archives in California, Massachusetts and the Schomburg Center for Research in Black Culture, a research library of the New York Public Library and an archive repository for information on people of African descent worldwide.

Jones said casting such a wide net was almost a necessity when it came to researching Davis because of her storied history and decades of activism for social justice.

Davis is distinguished professor emerita of history of consciousness and of feminist studies at the University of California, Santa Cruz. Her research interests are feminism, African American studies, Marxism, popular music, social consciousness and the philosophy and history of punishment and prisons. She co-founded Critical Resistance, an organization working to abolish the prison-industrial complex.

At Emory, Jones discovered a Soviet publication with Davis on the cover. In 1971, the CIA estimated that 5% of Soviet propaganda efforts were directed towards the Angela Davis campaign. Jones also turned up Angela Davis greeting cards and a flier for a barbecue that were used to raise money for Davis’ legal defense.

Jones credits Wright State with giving her the freedom to incorporate her research into the classes she teaches. Jones heard Davis speak at Wright State in 2009.

Jones said one of the biggest challenges in completing the book project is that Davis is such a major national and international figure, and has a connection to so many different groups, that there is a massive amount of archival material on her around the country.