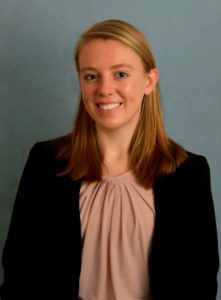 After completing her studies in neuroscience, Abagail Chumley decided to explore a completely different world — political science and government.

The 2020 Wright State University alumna is participating in a prestigious fellowship at the Ohio Legislative Service Commission, a nonpartisan agency that provides the Ohio General Assembly with drafting, research and budget analysis, training and other services.

“I began to think about how my experience in neuroscience and research could be put to use in a seemingly unrelated field,” she said. “I decided to study poli sci and scope out the job opportunities hoping to eventually be involved in health policy.”

Chumley graduated from Wright State with a bachelor’s degree in neuroscience with a minor in political science in 2020. She had completed all of her neuroscience degree requirements in the spring of 2019, but still had a year left on her scholarship and decided to pursue a minor in something new rather than graduate early.

“I wanted to experience something completely different from what I had been doing for all of college,” she said. “I didn’t want to settle on a career before trying out a few different fields.”

Chumley said she had always been interested in politics. After joining the Wright State chapter of the College Republicans, she started to enjoy it more and get more involved.

She said politics excites her because of its high intensity.

“There is always something going on, never a dull moment,” she said.

Chumley grew up in the Cincinnati suburb of Loveland. She became interested in neuroscience when she was a teenager.

“I love any element of mystery, and there is still so much that we don’t know about the brain,” she said. “The idea of uncovering these mysteries and understanding something complex was attractive to me and still is.”

After graduating from Milford High School in 2016, Chumley enrolled at Wright State.

“Wright State offers a more personal environment than a lot of the larger Ohio schools, and I felt drawn in by the opportunity to get to know more professors personally and by all of the undergraduate research opportunities,” she said.

Chumley said the highlight of her time at Wright State was studying amyotrophic lateral sclerosis or ALS, with Shulin Ju, Ph.D., associate professor of biological sciences.

“This began as an extracurricular where I assisted graduate students with their work, and by the end of my time in the neuroscience degree I was able to work independently and earn class credit there,” she said.

Chumley said Wright State prepared her to succeed by offering opportunities to undergraduates that are not available everywhere.

Ju said that unlike most undergraduate students who would not start their research work until junior or senior year, Chumley reached out to him to discuss research opportunities during her first year at Wright State.

“Beginning with little lab experience, Abby quickly learned and established herself as an independent researcher,” said Ju. “She made excellent progress on her project and is a student that any lab would wish to have.”

Laura Luehrmann, Ph.D., professor of political science and director of the M.A. Program in International and Comparative Politics, said Chumley was one of those students who came to class always prepared to discuss and probe further.

“I was immediately impressed with her sharp mind and her ability to see thorny questions from multiple viewpoints,” she said.

Luehrmann said Chumley is also a perfect example of a super bright student seeking out and completing opportunities — from the University Honors Program to neuro lab research to leadership in the College Republicans.

Chumley was accepted into the fellowship program of the Ohio Legislative Service Commission in the summer of 2020. Shortly after beginning the yearlong fellowship in December, she was placed in the office of State Rep. Scott Lipps, chair of the House Health Committee.

“My job includes a lot of constituent work, which is the backbone of what any political office does,” she said. “This includes helping constituents of Representative Lipps’ district with any issues they may be having with state agencies, as well as communicating with them regarding any policy concerns or comments they may have.”

Chumley has also been given the opportunity to assist with hearings by the House Health Committee and learn the process of clerking the committee. Her immediate career goal is to continue working for the Ohio Legislature and to become more and more involved in health policy.

“They are just a few of those professors that I will always appreciate and be grateful to,” she said.

Hannah said Chumley completed an internship with a local campaign where she was entrusted with more responsibility than the average intern.

“Her drive to accomplish tasks independently was a major asset for her campaign, and it was a pleasure to watch her apply her intelligence and instincts in the political world,” said Hannah.

Luehrmann said she couldn’t be happier to see Chumley using her skills and background in neuroscience and politics in the Ohio Legislature.

“Her prestigious LSC internship will open even more doors for her, and I sincerely hope she continues her commitment to informed public service,” said Luehrmann said. “Abby gives me great hope for her generation.”