It ended with a downhill, eight-foot putt on the 18th green of the NCR Country Club. When Bryce Haney’s stroke dropped the ball into the heart of the cup, it capped a wildly successful fall season for the Wright State University golf team that promises to carry over into the spring.

“We have our sights set on bigger things down the road,” said head coach Conner Lash. “I always tell the guys let’s make a national splash. I think we’re starting that.”

On Oct. 19, Haney completed a 209, four-under-par, two-day performance to win top individual honors by one stroke and help lead Wright State to victory in the Flyer Invitational. It was the Raiders’ fourth consecutive tournament title in the five-tournament fall season.

The Raiders enjoyed their victory celebration on what was a beautiful, sun-kissed fall day marred only by the occasional sweat bee dive-bombing players and fans as they gathered outside the stately, pillared clubhouse necklaced with white rocking and Adirondack chairs.

Haney knew he had a chance for a birdie but also realized it was a risky putt because of the downhill slope.

Lash accompanied Haney during the final round to serve as a sounding board and source of reassurance. After the two arrived on the 18th green, they carefully studied the putt of the previous golfer to gauge the break.

“I said, ‘Hey, you know this course. This is what I think. But go with your gut. You know best,’” Lash recalled telling Haney. “He hit the putt and it went right in the middle of the cup. That clinched it.”

Lash said Haney had played a lot of really good golf during the season but just couldn’t quite get that individual win. 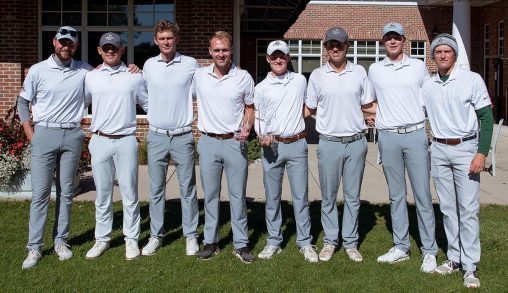 “So it was really cool to see him finish well in front of his friends and his family and his teammates,” Lash said.

Lash said one of the highlights of the season for him was winning the tournament at Ball State by 38 strokes, setting some school records and realizing that they could have a special team.

“I think that’s when it all started to click,” he said.

Lash said the players are good at keeping the ball in play.

“Their strength is that they’re not really bad at anything. They’ve worked so hard over the years and sacrificed so much,” he said. “…They are all just really solid at everything.”

Lash said he is especially proud of his players being able to manage their nerves and hit good shots under pressure.

Haney, an MBA student, said being able to play regularly at the NCR Country Club since it is his home course has made him a much better player.

Haney said the biggest challenge for him is just maintaining a singular focus on the shot that is in front of him.

“In the past I’ve gotten ahead of myself and it’s been tragic for me,” he said.

Haney said there are many things that make the team a special one.

“We have a coach that we absolutely love,” he said. “All of the guys on the team just gel really well together. We have great team chemistry.” 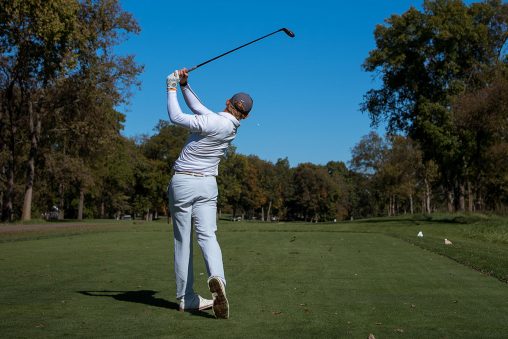 The Raiders will hold practices and workouts over the winter in preparation for the spring season, which will include Horizon League play.

The 28-year-old Lash was named the head golf coach in August. A former Wright State student-athlete who served as a team captain as a junior and senior, Lash was an assistant coach at Wright State during the 2016-17 season and then again from March 2020 until his promotion to head coach. In the interim, he worked as a professional caddie on the LPGA Tour.

After having the 2020 season canceled by COVID-19, the Raiders bounced back with five top-three team finishes in 10 tournaments during the spring of 2021 on the way to a runner-up finish in the 2021 Horizon League Championship.

Lash said what makes this team special is how well they get along and how self-motivated they are.

Lash said team van rides to matches are fun because the players are always cracking jokes and enjoying each other’s company.

“Everybody likes each other,” he said. “You can feel the energy. When they all start playing well it kind of clicks for everybody. They are that close with each other. And they’re happy when everybody wins. It’s really special.”

Lash said the team will hold practices and workouts over the winter in preparation for the spring season, which will include Horizon League play.