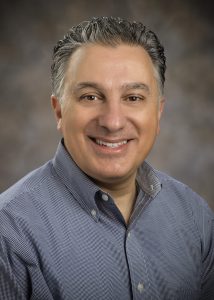 Awad Halabi is an associate professor of history and religion.

Awad Halabi, Ph.D., who has expanded knowledge about the Middle East and the Islamic world on campus and in the community, received Wright State University’s 2021 International Education Award.

Halabi, associate professor of history and religion, was presented with the University Center for International Education award by President Sue Edwards, Ph.D., on Nov. 4.

“During his tenure at WSU, Awad has made consistent efforts to expand global awareness on campus and in the surrounding communities in addition to contributing to an internationally focused curriculum,” Opolot Okia, professor of African history, wrote in nominating Halabi on behalf of the Department of History. “He has distinguished himself as a scholar, teacher and through his service to the profession.”

Halabi joined the faculty at Wright State in 2005, when only one other faculty member specialized in the Middle East region and the discussion of the Middle East and Islam had limited exposure on the campus.

Halabi created a minor in Middle East and Islamic Studies, enabling Wright State to become one of only a few universities in Ohio with such an offering. He also promoted public lectures and events and made outreach efforts to the community.

Halabi’s courses include introductory classes on Islam and the Middle East, from the rise of Islam in the seventh century to present day. His classes dealing with war and conflict contribute to the Department of History’s War and Society concentration. His classes in the Comparative Religion Program cover topics on modern Islam, the Qur’an and Islamic law, and gender issues in Islam.

Students say they appreciate Halabi’s approachable teaching style and how he makes complex topics intelligible, expanding their understanding of Islam and the Middle East.

Many of the students who enrolled in the minor in Middle East and Islamic Studies, or took a preponderance of their classes on the Middle East and Islam before it was established, have been able to fulfill their academic and career goals. These students have acquired positions in federal security agencies, the U.S. military administration, international education programs, graduate studies and higher education.

He established the Middle East and Islamic Studies Lecture Series, inviting American and international scholars to examine a range of topics on modern Islam, gender issues in Middle Eastern and Islamic societies, human rights and the Palestine-Israel conflict.

Halabi has participated in over a dozen lectures and seminars on campus, including leading book discussions and participating in author roundtables hosted by the Dayton Literary Peace Prize. He has participated in seminars led by the Dayton Council on World Affairs, the UCIE Brown Bag Seminar and the University Honors Symposium. He delivered talks on contemporary issues in the Middle East, such as the 2011 Arab spring uprisings, and religious topics, such as the Islamic approaches to sustainable environments.

Halabi served on a committee that successfully nominated Salfit, a Palestinian town in the Occupied Palestinian Territories, to establish a Sister City agreement with Dayton. He has begun meeting representatives of Dayton’s educational institutions, including Wright State’s UCIE, to explore how the two higher education institutions in Salfit can establish relationships with universities and colleges in Dayton.

Halabi’s book “Palestinian Rituals of Identity: The Prophet Moses Festival in Jerusalem, 1850–1948” will be published by the University of Texas Press in 2022.