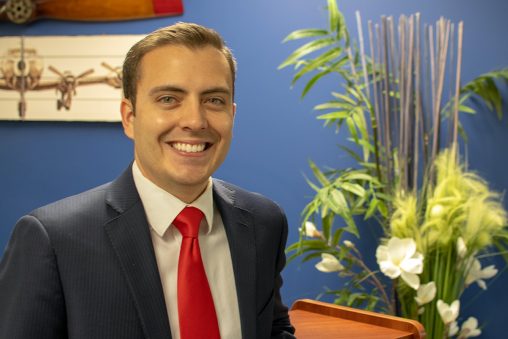 Working in confined spaces such as coal mines, chemical vats and aircraft fuel tanks where toxic fumes can quickly overcome workers is more than a little dangerous.

Wright State University biomedical engineering alumnus Zachary Kiehl is at the helm of a startup company developing wearable sensor technology and intuitive software designed to make it much safer through a unique early warning system.

“Think of it (SafeGuard) like an intelligent guardian,” said Kiehl, the 30-year-old co-founder and CEO of Sentinel Occupational Safety, Inc. “When you’re talking about health and safety, sometimes seconds matter. There is a demonstrated need for this type of technology.”

SafeGuard is a computer software platform that includes a mix of wearable chemical and physiological sensors that monitor levels of toxic chemicals, the threat of explosion and the vital signs of workers such as heart rate and respiration as well as posture and motion.

“It fuses these all together to provide a complete picture of that individual in a risky environment,” said Kiehl.

The sensors can also be personalized to take into account the physical attributes of individual workers through machine-learning, the use of computer algorithms to automatically make improvements through experience and by the use of data.

Historically, workers in dangerous confined spaces are monitored one-on-one by another worker who is in close proximity. Kiehl was able to successfully monitor 15 workers at the same time using SafeGuard during a demonstration for the Air Force.

The system can spot problems that would go undetected by an on-site human monitor, enabling for the quick evacuation of workers or a swift response from rescue crews. It also would reduce the chance of multiple fatalities when workers are overcome trying to help or rescue their co-workers, something that happens 60% of the time when there are confined-space fatalities.

Kiehl said both the Air Force and Navy plan to purchase the system. And he said construction, mining, oil and gas, and other commercial groups have shown interest and are signing up to be early adopters.

Kiehl said there is also a potential application to use the system to detect symptoms of COVID-19 by serving as an early indicator of abnormal vital signs, though he specified that SafeGuard cannot “detect COVID.”

Kiehl grew up in the western Ohio village of Houston. When he was a junior at Houston High School, he wrote a paper on biomedical engineering, expressing his desire to go into the field.

“I’ve always been pretty passionate about building systems, tools, technology to help people,” he said. “Biomed is this cross-discipline of math, science, physiology and engineering that does a little of everything. It was very intriguing to me. And the focus on humans was just icing on the cake.”

After graduating from high school in 2010, Kiehl continued his studies at Edison State Community College in Piqua and in August 2012 transferred to Wright State, attracted by the university’s longstanding biomedical program, its proximity to the Air Force Research Laboratory and potential opportunities to work in the area of human performance.

Kiehl said the academics and camaraderie with classmates was the highpoint of his Wright State experience despite having to often put in 12-hour days in the classroom and labs.

“What I probably enjoyed most was just solving challenging problems and working on cool laboratory projects with passionate people that were gifted intellectually,” he said.

He later interned at the Air Force Research Laboratory in the human performance wing and as a graduate research assistant at Wright State. His master’s thesis focused on data analysis and algorithm development from a camera system that could detect heart rates from a couple hundred meters away.

Following graduation, he landed a job at Aptima, which is known for human-centered engineering innovations. He started as a technical engineer and then advanced to program manager, where one project involved confined-space monitoring.

Six years later, on March 24, 2020, Kiehl cofounded Sentinel to continue the research and development of SafeGuard, which was built in collaboration with the Air Force, Navy, Air Force Research Laboratory, Lockheed Martin and NextFlex.

Kiehl became Sentinel’s first and only employee on Jan. 1, 2021. Today, the company employs three full-time workers and two interns as well as several consultants and multiple Aptima workers in support roles, bringing the total workforce to between 10 and 15. The company has raised over $2 million in venture capital.

Kiehl said the most challenging thing about launching his startup company is having to take on a wide variety of tasks and maintaining a sharp focus on company goals while keeping a healthy work-life balance. But he said the rewards are immense.

“At the end of the day, we are truly building technology that has the potential to save someone’s life,” he said. “That’s the most important thing to me.”

Kiehl said the technical skills he gained at Wright State such as how to overcome challenging problems and work with other people on campus and in the community are irreplaceable and foundational to his success.

“Wright State has a special place in my heart,” he said. “I grew from a student to a professional very quickly over that three-year span.”