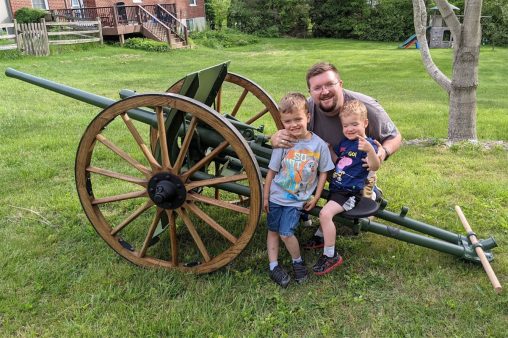 Jared Shank, who earned degrees in geography and earth and environmental sciences from Wright State, restored a World War I cannon.

A World War I cannon that had been a treasured fixture at a veterans memorial in the western Ohio village of St. Paris before falling into disrepair has never looked better.

The light artillery piece was lovingly restored by Jared Shank, a military veteran and two-time graduate of Wright State University.

The cannon had been part of the downtown memorial for nearly a century and was a favorite of neighborhood children, who loved to play on it. After being exposed to the elements for more than 80 years, the rusted cannon with its broken wheels was deemed unsafe and moved to storage in 2012.

In 2019, Shank responded to a call for volunteers to restore the cannon, which he did using private funds. He worked on it in his garage, piecing it back together by replacing missing or broken parts. For example, he replaced the missing brass seat with a metal piano chair of identical dimensions.

Shank, who grew up just outside St. Paris, said he remembers playing on the cannon as a child and also listening to his grandfather tell stories of his uncle who served in World War I and suffered from the effects of mustard gas until his early death in 1930.

“So when I look at the cannon I not only see its history, but I remember fondly time spent with family growing up and learning about military service,” Shank said.

After graduating from Graham High School, Shank joined the U.S. Army, where he spent the next four years that included a tour in Afghanistan. As part of the Army’s 82nd Airborne Division field artillery, Shank jumped out of planes along with howitzers. Once on the ground, his unit would launch shells at enemy targets to protect infantry and patrol units.

As a student at Wright State, Shank became involved in the Geography Program, lured by the mapping and satellite imaging aspects that reminded him of his duties in Afghanistan.

He earned his bachelor’s degree in geography in 2009 and his master’s in earth and environmental sciences in 2013 from Wright State.

Shank’s experience serving in the military combined with his degrees gave him an understanding of near-surface geophysics and its significant role in archaeology and metal detecting.

He served as president of the Dayton Diggers, a nonprofit group of amateur archaeologists who use metal detectors to recover and document historical artifacts that can be displayed.

For his master’s thesis, Shank used magnetics, electromagnetics and ground-penetrating radar to find missing gravestones and graves of military veterans at a Xenia cemetery.

After earning his master’s degree, Shank worked as Wright State’s transfer articulation coordinator. In 2014, he received the Tom Vandermeulen Award from the Ohio Transfer Council for enhancing relations among people of diverse cultures, ethnic groups, first-generation college students and students with disabilities.

Shank currently works as senior director for military and apprenticeship initiatives and special projects for the Ohio Department of Higher Education. He helps veterans and service members pursue their degrees at all 36 of the state’s public educational institutions by finding ways to get military training, experience and coursework evaluated for potential use as college credit.

“Wright State absolutely taught me the ability to communicate and solve problems and how to conduct and understand research,” he said. “Those skills were not only useful as part of the cannon restoration project but also in my daily job working with college and university faculty and staff members.” 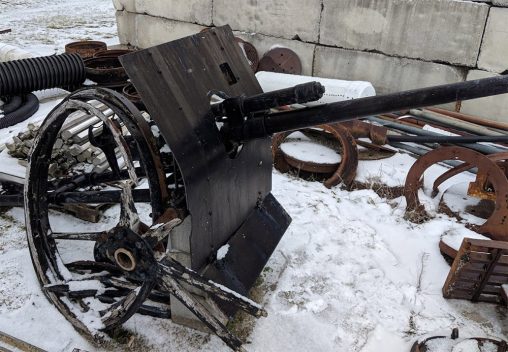 The Bethlehem Steel 37mm Cannon before it was restored.

The cannon in St. Paris was designed and produced by the Bethlehem Steel Company in Pennsylvania for the French. Shank’s research suggests that the Bethlehem Steel 37mm Cannons were never used by the United States in combat but were tested and then held as a last line of defense.

Once the United States entered World War I in 1917, the contract with France was canceled. The remaining cannons were confiscated and until 1920 were used for training by National Guard units.

Shank said that when he sits down on the cannon and looks down the sights, he feels a direct personal connection to the U.S. troops and French allies who used it.

“I can picture the cannon crew doing their drills and practicing shifting the trails back and forth to follow moving targets,” he said. “I can picture the gunner and loader loading and firing. I can also appreciate the relative simplicity of this cannon and yet it was a fairly cutting-edge design for 1916.”

During the restoration project, Shank conducted research at museums and other locations with the same cannon to determine what parts were original and what had been replaced. He found a wheelwright shop to reconstruct an extra replica of the cannon’s wheels and located a skilled welder to fix broken pieces and hairline cracks in the protective shield.

“This project also required a large amount of labor in removing paint and rust and metal preparation for future preservation,” he said.

In July, St. Paris residents gathered to celebrate the reinstallation of the cannon. Shank plans to write a short history and parts manual that can be used by anyone else working to restore this model cannon, about 25 of which are in museums and displays around the country.

Shank said the project has given him an appreciation for cannons and other historical objects that are part of outdoor displays.

“It’s easy to take those items for granted until you know the work involved to get them in a condition for display,” he said.